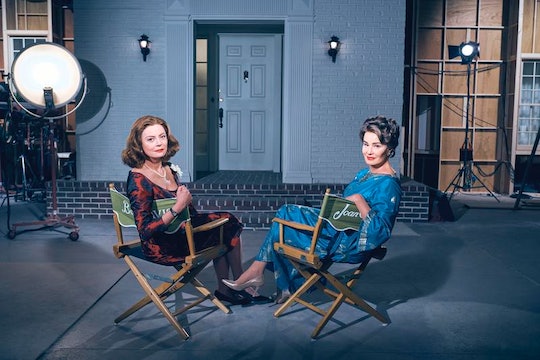 At a time when it’s finally socially acceptable to binge watch TV shows and become a recluse for weekends at a time, it’s totally appropriate to look forward to our favorite shows becoming available on Netflix. And since Ryan Murphy’s newest series, Feud, will be coming to an end soon, now is the time to ask when Feud will be on Netflix. Most of Murphy’s shows tend to end up on the streaming service eventually, but in this case, how soon is eventually?

Although Feud is his latest anthology, Murphy’s other new baby on FX is American Crime Story, which began in February 2016 with The People v. O.J. Simpson. Right now, it's available on Netflix, but it took a whole year for that to happen, so if Netflix has a similiar deal in place with Feud, fans might not see it appear on their streaming devices until early 2018. Of course, in the meantime, fans can get their fill of Murphy’s other shows on Netflix, but Feud is still so new that it definitely deserves a rewatch or two until the next installment of the anthology premieres.

These days, it seems like there’s always something of Murphy’s on TV (which I’m not complaining about in any way, mind you), so after Season 1 of Feud ends, there will be something else popping up long before it’s on Netflix. That is, if it goes by the same schedule as American Crime Story and premieres on Netflix a year after its television debut. (Personally, I'm hoping it will be sooner.)

April 2017 saw several shows leave Netflix, including Buffy the Vampire Slayer, The X-Files, and Ally McBeal, but all of Murphy’s FX series have remained in place, so hopefully that's a good sign that Feud will get an allotted spot when the time comes. In the meantime, fans still have the finale to look forward to on Sunday night. I'm particularly interested to see where Murphy will choose to leave things off between Joan Crawford and Bette Davis. The two of them have been at each other's throats all season. Will that continue and if so, what will their parting shots to each other be?

There hasn’t been an official announcement about when Feud will hit Netflix, but it's only a matter of time. When you have a show of this caliber, starring the likes of Jessica Lange and Susan Sarandon, you're going to want that to be available to the masses.