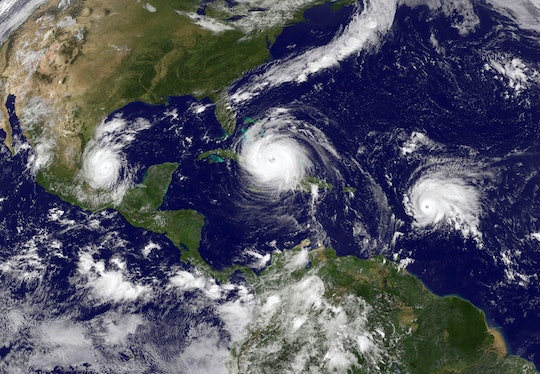 When Will Hurricane Jose Be Over?

It has only been a few days since Hurricane Irma made landfall in the United States, leaving millions of people in Florida without power after devastating the Caribbean. But meteorologists now have their eye on a new storm that has been brewing in the Atlantic: Hurricane Jose. Once a Category 4 hurricane, Jose has been downgraded to a tropical storm Thursday, although forecasters expect it to restrengthen by this weekend, though not by much, according to CNN. So when will Hurricane Jose be over? Scientists predict the storm will last at least through next week.

Forecasters say it's too early to tell if Tropical Storm Jose will make landfall, but most computer models predict it will stay west of the U.S. coast, CNN reported. But they do believe Jose, which is the sixth named hurricane of the season, will inch closer to the United States over the next five days before it turns north. The tropical storm is expected to pick up steam by Friday, though, and became a Category 1 hurricane once again, according to CNN.

As of Thursday morning, Tropical Storm Jose was about 435 miles outside of Bermuda, traveling slowly west, CNN reported. Jose is causing swells in Bermuda and the Bahamas, as well as on the northern coasts of Hispaniola and southern United States, according to USA Today.

Over the next few days, Tropical Storm Jose is expected to spread those swells northward along the East Coast, reaching North Carolina's Outer Banks, according to USA Today. While National Hurricane Center forecasters said Jose's path is somewhat unpredictable, they have noted that the storm will likely cause rough surf, life-threatening rip currents, and strong wind gusts offshore, USA Today reported.

Forecasters also said that coastal flooding could be possible if Tropical Storm Jose moves closer to the East Coast, according to NJ.com. Meteorologist Joe Miketta, who is based in New Jersey, told the outlet,

We are concerned mainly about the marine impacts for our area next week, and even this weekend. ... What's dangerous about this time of the year is there aren't many lifeguards left at the beaches. That's our big concern right now.

NJ.com reported that Hurricane Jose currently has sustained winds of 70 mph as of Thursday morning, which is why meteorologists downgraded the storm from a Category 1 hurricane. Category 1 storms have sustained winds of 74 to 95 mph, while tropical storms have a maximum wind speed of 39 to 73 mph, according to NJ.com. National Weather Service forecasters are closely tracking Jose's path.

The potential threat posed by Tropical Storm Jose comes on the heels of destruction left by Hurricane Harvey and Hurricane Irma. Late last month, Hurricane Harvey crashed into the Texas Gulf Coast, destroying Houston and its surrounding areas. According to TIME, at least 70 people were killed by Harvey. Tens of thousands of people in the area were also displaced by the hurricane.

Then on Sunday, Hurricane Irma barreled into Florida after sweeping through the Caribbean islands. The storm, considered one of the most powerful hurricanes on record, has killed at least 28 people, left millions without power, and destroyed homes and businesses. The tiny island of Barbuda, in particular, experienced complete devastation and was cut off from communication because of Hurricane Irma.

Tropical Storm Jose is not expected to reach Hurricane Irma or Hurricane Harvey levels. But it's understandable why residents are concerned about Jose's potential impact, and whether or not it'll actually make landfall. People in Texas, Florida, and the Caribbean have just started to pick up the pieces after two catastrophic storms. Another hurricane, at this moment, would be too much to bear.