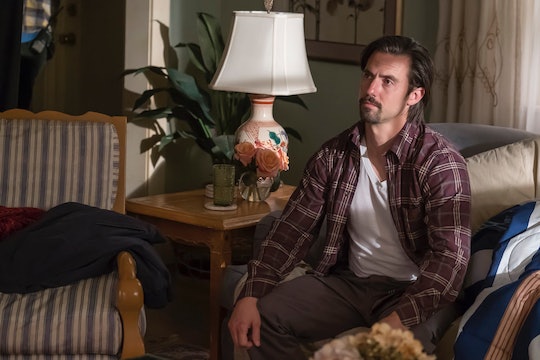 'This Is Us' Is Keeping Jack's Death Under Wraps

Ever since Kate showed Toby her father’s urn on This Is Us, fans have been asking how Jack died and when will it happen because let’s face it — the show has done an amazing job in showcasing Jack as the best dad and husband ever. But with the season finale fast approaching and plenty of clues hinting that the tragic moment is nigh, when will Jack’s death be revealed on This Is Us?With William gone (who else is still crying over that scene?), it’s one of the big remaining questions fans have right now.

Of course, it’s going to be interesting to see how Kate and Toby’s relationship progresses and if they go back to the West Coast or not. And then there’s Kevin’s movie role opportunity just as he started reconciling with Sophie. But questions about Jack’s death have been swirling around for almost the entire season and it seemed like viewers were finally going to be let in on the truth of the tragedy. But, according to creator Dan Fogelman, the season finale of This Is Us might just bring up more questions than answers, so don’t take out the tissues just yet. (Well actually, do take them out because no matter what it’s probably going to be a major cry fest.)

In an interview with Variety, Fogelman said that while fans are definitely gearing up to learn more about Jack’s death on This Is Us, it’s going to be something that’s more thoroughly explored later down the line.

The real story of it will play out not in the near, near future. In terms of seeing the moment where something happened to Jack, that’s a little ways away. Where it will be finally all fully revealed, that’s a ways off.

With any luck, the cause of Jack’s death will be revealed sometime during Season 2, because it looks like Season 1 isn’t going to end with the big reveal most fans have been waiting for (and also highly dreading). On the one hand, that’s probably good since it would cause an eruption of body-wracking sobs from most fans. But on the other hand, I can’t believe Jack’s death on This Is Us is still being kept under wraps.

Milo Ventimiglia, the man himself behind super dad Jack Pearson, told Entertainment Weekly that the big reveal of his character’s death is still yet to come, but in the not so near future, basically echoing Fogelman’s own claims. The good news? Prolonging Jack’s death on This Is Us means prolonging the inevitable sadness and emptiness that will come along with it.