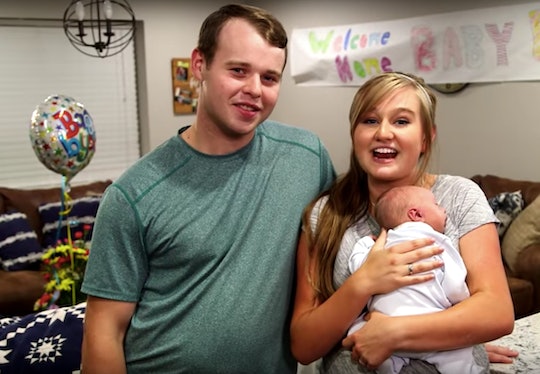 After welcoming their first child together earlier this month, new parents Joseph and Kendra Duggar seem to be finally settling into their new life with their new baby — a son named Garrett David. And as Counting On fans know, there are more than enough experienced parental figures to look to for advice within the Duggar family, should they have any questions at all. But how close are they to the rest of the Duggar family? Or more specifically, where are Joseph and Kendra Duggar raising their baby right now?

Given what's known about the pair, it seems like the new parents are raising their little boy in Arkansas. It should be noted that neither Joseph nor his new wife, Kendra, have explicitly said where they're living right now, but it's understood that they're close to the rest of the Duggar family in the state of Arkansas. And with a tight-knit family like Duggars, it makes sense that most of them tend to stay pretty close to their parents, who live in Tontitown, Arkansas with the rest of the young and unmarried Duggar kids. The only outlier right now seems to be Jinger Duggar, who was the first Duggar daughter to move out of the state when she relocated to Texas to be with her husband, Jeremy Vuolo.

Before they got married, though, Joseph and Kendra revealed to Jana Duggar that they were in the process of building their own home, according to the Duggar Family blog. At the time, it seemed like the house was far from being complete, but now that they've been married for just over nine months, they've likely gotten some work done on it in that time.

During that same sit-down with Jana, the happy couple joked at the time about how they might not have a bathroom or kitchen in their new house when they came home from their honeymoon. At that point, according to the Duggar Family blog, Jana joked that they could always stop by their family's house because there was plenty of space. Get it? Because the Duggars have 19 kids?

All jokes aside, though, it really does seem likely that Joseph and Kendra have stuck quite close to home as they started their new life together, with their baby boy in tow. After all, they did get married in Arkansas and both Kendra and Joseph's families are from the state. What's more, an Amazon baby registry attached to Kendra and Jospeh's names lists their location as Springdale, Arkansas, which is just about 7 miles away from the rest of the Duggar family in Tontitown.

And they wouldn't be alone in that decision to stay in Arkansas. In fact, most of the other Duggar kids have stuck around central Arkansas after they got married and started families of their own. For example, according to In Touch Weekly, Ben and Jessa Seewald live in a house near Fayetteville, Arkansas, which is only about a 20-minute drive to Tontitown.

Then there's Jill and Derick Dillard, who recently moved home to Arkansas after doing missionary work in Central America, following the birth of their second child, son Samuel Scott Dillard, according to People. And Joy-Anna and Austin Forsyth — who welcomed their first child, a son named Gideon in February — also live in Arkansas, according to People, in a home they remodeled.

Whether they're down the block or a 5-hour drive away, it's safe to assume that Joseph and Kendra will have all the support they need from their families and their friends as they raise their baby boy.