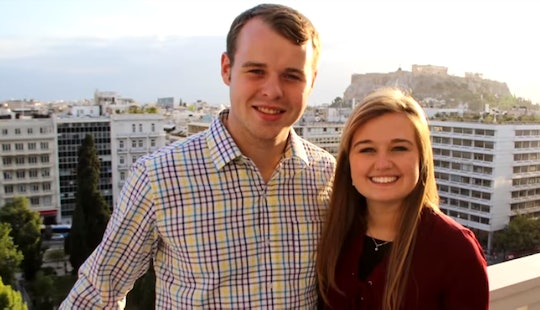 What Does Kendra Duggar Do? The 'Counting On' Star Is Expecting Her First Child

Joseph and Kendra Duggar, stars of TLC's hit series, Counting On, will grow by one more this year. The newlyweds, who married in September, announced they're expecting their first child together later this year, according to People. There's no doubt that 2018 will be a busy year for the young couple, who plan to share the ups and downs of Kendra's pregnancy on Counting On's new season. But that's not all fans want to know about Kendra and Joseph Duggar. Since not a lot is known about Kendra, some people may be asking: What does Kendra Duggar do? The 20-year-old mom-to-be is considered a reality TV personality, and there isn't another profession listed for the newest Duggar family member.

Kendra is one of the stars of Counting On, TLC's popular spin-off from the original hit, 19 Kids and Counting. She was a frequent guest on the TLC show during past seasons of Counting On, according to inTouch Weekly, but will take on more of a role now that she is pregnant with Joseph's child. Kendra was 19 years old when she became engaged to Joseph Duggar, who works for the family business as a fifth-generation house flipper, according to Inquisitr.

Kendra is also a preacher's daughter, and had a similar upbringing to that of Joseph. The Arkansas native is one of seven children raised by Paul and Christina Caldwell, inTouch reported. Her father, Paul, is the pastor at Lighthouse Baptist Church, where the Duggar family attends regularly. The Duggars are close family friends with the Caldwells, who share similar conservative views and strict religious values, according to The Stir.

Not surprisingly, Kendra had met Joseph through her family's church, according to People. They then began courting in March. The 23-year-old Duggar son then proposed to Kendra during his sister Joy-Anna's wedding in June, telling People at the time,

Our families are close friends through church and this has allowed Kendra and me to get to know each other. She's the best!

Kendra and Joseph said their "I Dos" four months later, on Sept. 8, according to US Weekly. The couple's wedding took place in their home state of Arkansas; Kendra's father, Pastor Paul Caldwell, officiated the wedding. Joseph and Kendra have been together nine months, and married for three months. And soon after they exchanged vows, fans began to suspect that Kendra was pregnant with their first child.

After a couple of months of speculation, Kendra and Joseph announced in December that they were expecting their first child after tying the knot in September, E! News reported. The 23-year-old Duggar son said in a video message posted to the Duggar Family blog, according to E! News, "I've always dreamed of having my own family, and it's really just kind of surreal that it's actually here."

Last week, the couple confirmed that Kendra is pregnant with a baby boy, according to US Weekly. And the Counting On stars had a truly explosive sex reveal: Joseph's police officer brother, John David, shot a bullet 200 yards into tannerite — an exploding target commonly used for firearms practice — that was mixed with blue powder, US Weekly reported. The whole Duggar family was present for the sex reveal.

The newlyweds told US Weekly, "Wow! We are so happy to learn that our firstborn is a boy! Our minds are already racing toward all the future memories to be made with this little guy! Most of all, we are already asking God to bless him and help us grow him into a loving and faithful follower of Christ!"

Kendra and Joseph Duggar plan to document Kendra's pregnancy journey on Season 5 of Counting On, according to E! News. The new season will premiere on TLC in Spring 2018.