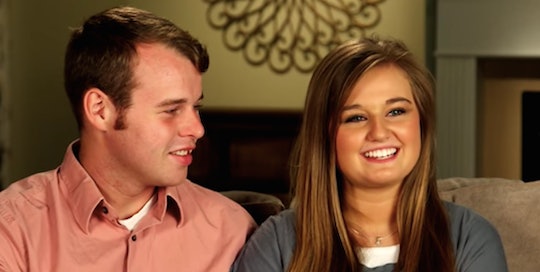 ‘Counting On’ Is Officially Coming Back, & There Will Be *So* Many Babies

For months now, Counting On fans have wondered whether the show would return. Although some speculated the series had finally reached its end, TLC confirmed on Monday that it was renewed for another season. This is very good news for viewers, as there's a lot of exciting news that will be covered on Season 5. So, when will Counting on come back? It looks like fans won't have to wait very long.

As some of you might already know, Kendra Caldwell and Joseph Duggar are expecting their first child. Shortly after Us Weekly reported the news on Monday, TLC released its own announcement about the thrilling milestone. The network's exclusive featured a new interview with Kendra and Joseph, and it also casually dropped the return date of Counting On. Interesting timing, right?

Big news! Joe and Kendra Duggar of Counting On are thrilled to announce they're expecting their first child! They shared the news with an adorable photo of their growing family. Don't worry! You'll be able to keep following Joe and Kendra's story when Counting On returns to TLC in Spring 2018.

Yep, fans will only have to wait about three months for the show's return.

So, what can viewers expect on the new season? Get ready for a lot of babies and pregnancies.

Obviously, Kendra's pregnancy will be filmed, and the network might even show when she and Joe first announced the news to their families. It's a very exciting time for the pair, and it will be nice to see how they're handling their impending parenthood.

Also, it's totally possible that fans will learn the sex of the baby on the new season. The Duggars typically save their sex reveals for the cameras, because ratings, people.

As for what Joseph and Kendra's baby predictions are, Joseph said, according to CBS News 8:

I’ve always dreamed of having my own family and it’s really just kind of surreal that it’s actually here. I kind of think it’s going to be a boy, but either way, I’m happy just to have a baby.

I think it could be a girl. You never know!

Unfortunately, viewers will likely have to wait to see the birth of Kendra and Joseph's baby. If the couple conceived in November, their baby is likely due sometime in August, a few months after the show will conclude its season. A typical installment of Counting On lasts four months.

The good news, however, is that fans will probably get to see Joy-Anna Duggar give birth. Joy-Anna and are her husband, Austin Forsyth announced their pregnancy in August, putting her due date some time in February. So, expect a lot of exciting moments leading up to the delivery and a potential birth scene. Jessa Duggar filmed her two births for the show, so it's possible Joy-Anna will show her's too.

Speaking of Jessa, her storyline will likely center around the trials and tribulations of motherhood. Fans love Jessa's two kiddos, Spurgeon and Henry, so hopefully TLC will capture a lot of their milestones.

And of course, who could ever forget Jinger Duggar and Jeremy Vuolo. Although I don't think TLC will address Jinger's new fondness for wearing pants, I do expect the network to touch on the topic of babies. Fans are very invested in Jinger's reproductive choices (no matter how invasive this might be), and I can't imagine TLC would completely ignore this topic.

Finally, there's the issue of Jill Duggar and Derick Dillard's possible absence form the show. According to Derick, the family will not be returning to Counting On. Derick denies that TLC gave him the boot for transphobic remarks he made about reality star Jazz Jennings, and he argues that he left the series by choice. Unfortunately, it sounds like Jill wasn't a part of the decision making process.

All in all, it looks like the new season of Counting On will be a very interesting one. Internet troll Derick will be gone, Joy-Anna will give birth, and Kendra will be in the midst of her first pregnancy. Sounds compelling, right?