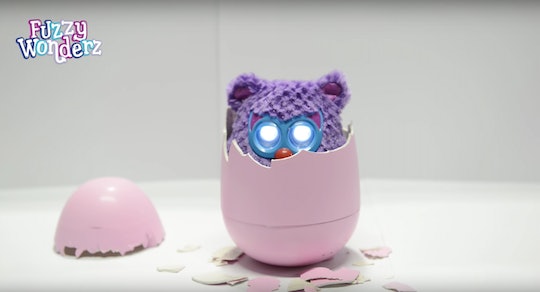 Where Can You Buy Fuzzy Wonderz? They're Somewhat Like The Sold-Out Hatchimals

If you missed the desperate rush and didn't manage to snag any Hatchimals of your own, there might just be a next best thing. No longer monopolizing the stuffed-animals-that-hatch market, Hatchimals met their match in Fuzzy Wonderz. But where can you buy Fuzzy Wonderz, and are they as hard to get as Hatchimals have been? The toys are still selling on the Fuzzy Wonderz website, but some iterations have sold out. If you're committed to getting one by Christmas, you'll need to act fast.

Update: Some customers who purchased Fuzzy Wonderz have alleged that they never received their toys and that the company has been slow to respond. In a Facebook statement to Romper, Steve from Fuzzy Wonderz said, "We're an authentic company that just got hit with the holiday rush." The company is not accredited by the Better Business Bureau.

The Hatchimals mark-up is real, as the toys are selling for anywhere between $100 to $250 on eBay. With a list price of $59.99, Hatchimals still aren't that cheap. Fuzzy Wonderz, a similar toy, are listed at the same, $59.99 price tag, and the company's site boasts free two-day shipping. It appears that, for now, they aren't sold in any stores. There are few Fuzzy Wonderz listings on eBay, though, at an inflated price.

Fuzzy Wonderz come in blue, green, pink, and purple shades. A couple of the twin packs (two "girls" and one "boy" with one "girl") are currently sold out on the company's website, but you can definitely still get single Fuzzies online. The toys come with special names, they sing, they tell stories, they joke, they sleep, and, of course, they hatch.

When comparing Hatchimals to Fuzzy Wonderz, users will note a few distinct differences. For one thing, the eggs — which, let's face it, are the main draw and the reason for all of the pre-holiday excitement — vary. Hatchimals eggs are spotted, whereas Fuzzy Wonderz eggs are smooth and one color. They both require some coaxing in order to eventually "hatch," but when Hatchimals are ready to go, their eyes light up from within their shells. As far as post-shell life goes, the toys look quite different. Hatchimals look like brightly-colored penguins, though their shapes vary based on a made up "species," with silly names like "Draggle" and "Owlicorn." Fuzzy Wonderz, on the other hand, are all the same shape as one another, with a variety of colors.

If your heart's set on Hatchimals, then you're in luck: Hatchimals will be available in stores again on Dec. 4th. But, if Fuzzy Wonderz are more appealing (and you'd rather have your purchase shipped to you rather than fight your way through a crowded Toys "R" Us), then Fuzzy Wonderz is a totally safe — and adorable — bet.