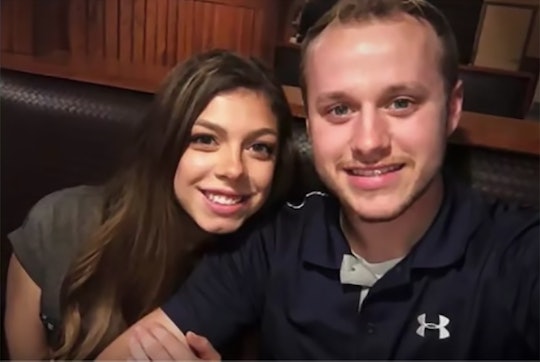 Counting On star Lauren Duggar is best known by fans as Josiah Duggar's wife. Although it's true Lauren is married to Josiah (the two tied the knot in June), there's a lot more to the reality star than that limited description. In fact, Lauren Duggar attended college in her native home state of Georgia for nursing, and she's extremely educated. Here's everything you need to know about Lauren's impressive college education.

Fans didn't know a lot about Lauren when she first started courting Josiah in January. All viewers knew about Lauren at the time were her parents' names (Lana and Dwain Swanson), where she grew up (Georgia), and her lack of a social media presence. But now that some time has passed since the initial courtship, more info about Lauren's life has emerged, like her past as a college student.

In a Counting On webisode called "College Tour," Lauren and her sister, Lilly Swanson, give Josiah a tour of their alma mater, Georgia Military College. Interestingly enough, Lauren first attended the college when she was only 16 years old, while her sister was just 13 years old. Lauren explained to TLC cameras:

It was a program for students that weren’t finished with their high school — it was called dual enrollment. And we were able to take high school and college classes at the same time. So, in two years were graduated high school and I got an associates degree.

Lauren studied nursing during those two years because she has an affinity for helping others. "I really enjoy helping people, I always thought I’d be a nurse," she confided to producers in the episode. "So, my dad always encouraged us just to get options out there."

As one might imagine, Lauren found it a bit daunting to pursue nursing at such a young age, especially since she was homeschooled. She explained, according to In Touch Weekly:

Coming to a college was kind of scary for us. I was not used to sitting in a classroom with other students. I was used to doing schoolwork on my own at my own pace. And in college you have deadlines. You had to hurry up and finish your work. I don't learn very quickly, so I had to spend extra time with the books.

Makes sense. I imagine it was somewhat of a culture shock for Lauren to study on a college campus after all of those years spent learning at home. At least she took a risk, right?

Although Lilly wants to get her bachelor’s degree in teaching and a master’s degree in speech pathology one day, Lauren doesn't have any plans to further her education.

"I do not plan on continuing my degree … ," Lauren confessed in the clip. "I just don’t actually enjoy school, and I don’t see myself becoming a nurse now."

Still, Lauren looks forward to the day when she can discuss the rewarding experience with her future kids. "I think [college] was really good for me. It's something I can look at and say, and tell my kids, 'Hey look what I did,'" Lauren shared in the video, according to the Duggar Family Blog.

Although it might disappoint some fans that Lauren no longer aspires to be a nurse, it doesn't change or diminish her past accomplishments. As it stands, Lauren has the prerequisites to one day enter a nursing program if she changes her mind down the line. A diligent fan on Reddit said about Lauren's qualifications thus far:

I was curious so I looked it up. Georgia Military College is a public junior college. It seems legitimate and like a lot of students transfer on to 4 year universities. BUT the school does not offer a nursing degree, it offers a degree in PRE-NURSING which I imagine is basically just prerequisites. She would need to go on to nursing school before she could take her boards and become a nurse.

So, here's to Lauren's educational accomplishments thus far. It's no easy feat attending college at 16, and it's really impressive she chose a field of study that services the greater good.