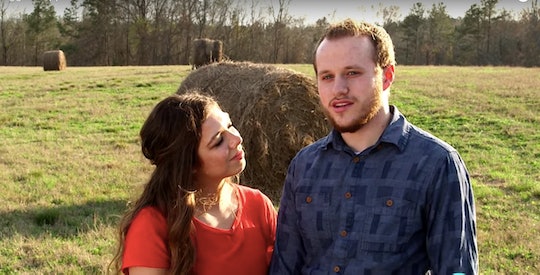 It feels like it was just yesterday that a certain Duggar son announced his newest courtship. But looking back at Josiah Duggar and Lauren Swanson's relationship timeline, it's clear that it's actually been quite some time since the two lovebirds' story got started. And given how quickly time has passed, they'll be saying "I do" before you know it.

While it might seem like Duggar and Swanson have been together for a while now, it's important to remember just how quickly their relationship blossomed into what it is today. But that tends to be the Duggar family style, so it should be entirely shocking to hear that it was only a matter of months before he put a ring on it, all starting with a courtship. Since then, though, Duggar — who has had his own Instagram account for quite some time, which is typically against the rules in the Duggar family before marriage — has been posting photos fairly regularly, plenty with his fiancee by his side.

So, let's look back at how 21-year-old Duggar's relationship with 18-year-old Swanson got started, as they're the next Duggar couple to be heading down the aisle.

While this might not directly involve Swanson, Duggar's breakup with his ex Marjorie Jackson back in 2015 definitely put him on the path to his next relationship. Duggar and Jackson had been in a courtship for four months at the time, before the Duggar family released the following statement to People:

Both Josiah and Marjorie have enjoyed getting to know each other and to build their friendship over the past months. We are so grateful that they each are seeking the Lord’s will for their future. A few weeks ago Marjorie and Josiah agreed to end their courtship, keeping in step with what they believe the Lord's will is.

It was probably a tricky time for Duggar, but it's clear that he has now moved on, and if it weren't for that hard time, he wouldn't be where he is today.

Nearly three years later, it's clear that Duggar has fully moved on from his relationship with Jackson and was ready to start things up with someone new. As People reported, Jackson traveled with the Duggar family in January 2018 for a trip through Australia and New Zealand. The family spoke at a conference, according to The Duggar Family Blog, and it seemed like Swanson was there to support her friends.

Shortly after their return from abroad, the couple's courtship was announced, according to People. So perhaps they had been getting to know each other while traveling abroad.

January 23, 2018: They Announced Their Courtship

Basically the day after their trip, Duggar announced his courtship to Swanson. In a statement to People, Duggar and Swanson said:

It's truly an exciting time for us, as we take this big step in establishing a relationship, getting to know one another even better and praying together toward our future. We are thankful to God and our families for the love and support we’ve received in starting this new chapter of life and look forward to sharing it with others as the future unfolds.

The two had been family friends for a while, according to People, but it seems like their trip really sparked the flame of romance between the now-couple.

March 2018: They Took Their Relationship To The Next Level

Then, in early March, the couple took the next step in their relationship, announcing their engagement on March 5, just six weeks after they started courting. The Duggar family confirmed their happy news on their official family website, writing:

We are so excited to announce that Josiah and Lauren are officially engaged!! We have prayed for many years that the Lord would bring the right spouses to each of our children. We have known Lauren and her family for a very long time and have seen how she has grown in her knowledge and understanding of the Lord.

April 2018: The Two Spent Easter Together

Not long after their engagement, Duggar and Swanson snapped an adorable photo for Instagram of themselves dressed in their Sunday best. "Happy Resurrection Sunday!" Duggar captioned the photo on Instagram, along with a verse from the bible all about the meaning behind Easter Sunday.

May 2018: The Couple Went Shopping For Their Wedding Registry

On May 21, Duggar took to Instagram to share a photo of him and Swanson working on their wedding registry list. "She enjoys shopping, and I enjoy being with her! Happy Monday!" he wrote, along with the hashtag, "#weddingregistryday." As with most registries, the couple shared a date for the upcoming wedding: Dec. 31, 2018, according to a link to a Bed Bath & Beyond wedding registry shared on Duggar's on Instagram account.

Since then, the two have been going on date nights with the family and just enjoying their time together as an engaged couple — presumably with a winter wedding in the works.