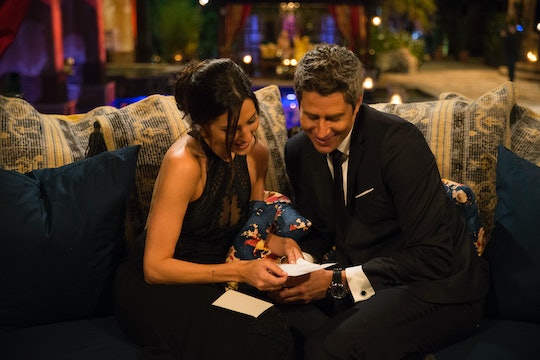 'Bachelor' Fans Will Be Impressed With Becca's Career

Becca Kufrin may not have brought any big props to her first meeting with Arie Luyendyk Jr. on The Bachelor season premiere, but she did bring a small ring box and convinced the Bachelor to get down on one knee during their first ever meeting, so that’s a good sign. The gesture made her stand out though, and not just to Arie but also to fans, who are wondering who she is and where Becca from The Bachelor works when she’s not convincing men to propose to her on national television.

In real life, Becca seems to take her job very seriously, though anyone who has been in the same profession with the same company for more than five years would feel the same way. As her Bachelor bio says, Becca is a publicist, but her official title is senior account executive with the public relations firm Skyya Communications. According to the company’s website, "Skyya Communications is an award-winning, full-service PR and strategic marketing communications agency with unparalleled experience serving the communications needs of emerging and well-established technology companies around the globe."

If that sounds fancy, it’s probably because it is and fans have every reason to perk up their ears a bit when it comes to Becca on The Bachelor this season, since she seems like she definitely has her life together and knows what she wants.

On Becca’s own LinkedIn account, she described her profession as one that enables her to work with clients from the start of projects and campaigns until the end. "I work hard to develop, plan, coordinate, execute and evaluate campaigns, events, product placement and branding to align with specific goals and strategies," she wrote in her profile, adding:

I'm knowledgeable on media cycles and patterns, allowing for informed timing in PR and marketing activities and campaigns. I build and maintain standing relationships with consumer, lifestyle, business, travel, broadcast and niche press, and have secured media placement on behalf of my clients in a number of top-tier outlets.

So yeah, she's kind of a big deal, even if she seems like she might be more laid back and light hearted than some of the other more serious women this season.

Becca started out with Skyya in 2012 as an account executive, right after graduating from Minnesota State University, Mankato. But it didn't take long for her to move up to the title of senior account executive, a position which she’s held since 2014. And judging by her Instagram, her role with clients really is hands on. She definitely seems like she’s made a solid place for herself within the company, which means that if she’s the last Bachelor contestant left standing at the end of the season, she and Arie are going to have a difficult decision to make regarding the move to start their new life together.

Right now, Arie is thriving as a real estate agent in Arizona, so he probably wouldn't be very quick to leave his home state and since Becca’s job has The Bachelor contestant working with important news outlets and basically being a rockstar in the office, I highly doubt that she’d be thrilled to leave all of that behind. However, the fact that Becca has seemed to grow with the company over the past several years does show that she could leave Skyya and land a similar position in Arizona, if need be. But she also gets to work with big companies like Aunt Fannie’s, which develops cleaning supplies for the home, and Fooddee, a catering business that works with a variety of cities across the United States, so it would have to be the right job to replace where Becca works now. (Then again, why should she have to move? Arie can sell real estate elsewhere, right?)

Obviously there are several weeks left to find out who Arie picks on The Bachelor, but if her dedication to her career is any indication of how seriously she takes the relationships in her life, then Becca will be a solid match for Arie.