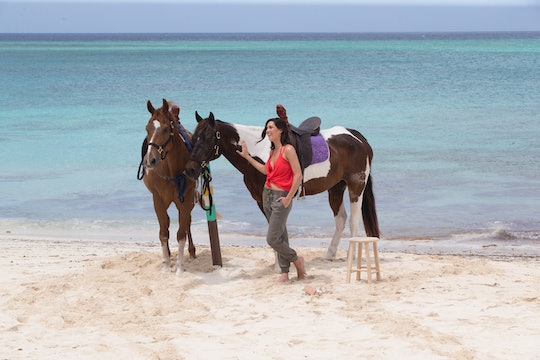 'The Bachelorette' Fantasy Suite Dates Are In Thailand Again

All of the random and not-so-exotic locations the contestants of The Bachelorette traveled to at the start of the season are about to pay off big time. Now that international travel has begun, Becca Kufrin and her remaining men will have Bachelorette fantasy suite dates in Thailand. I'm expecting some amazing oceanside huts literally on top of the water, and knowing The Bachelorette, I can't be that far off.

Reality Steve, known for his seriously spoiler heavy anecdotes about each season of the show, reported back in June that fantasy suite dates were filmed in Chiang Mai, Thailand, to be more specific. Although viewers might not know the name of the resort for sure until the episode airs and the camera pans to the name enough times to make the entire trip paid for by advertising alone, this isn't the first time in the franchise that fantasy suite dates or even finales have been in Thailand.

Sean Lowe’s season of The Bachelor filmed its finale at the Anantara Golden Triangle Elephant Camp & Resort. Although the preview for Becca’s fantasy suite dates doesn't give much away in terms of other activities, some shots do look like they take place at the resort. Since Bachelor in Paradise has filmed several seasons at the same Mexico resort, it's definitely possible that The Bachelorette recycles locations if production has a good relationship with different property owners.

Over the years, contestants and suitors of The Bachelor and The Bachelorette have traveled all over the country and then all over the world taking in the sights and going on adventures in the form of dates to get to know each other better. I’ve never been on a date that involved things like hang gliding or riding on the backs of elephants, but I guess it's just Bachelor things. In order to have these aesthetically pleasing dates, though, it’s definitely necessary to be able to have the act travel each season to far off places, and apparently they keep going back to Thailand.

Because of the exposure these resorts get on shows in The Bachelor franchise, it becomes something of an investment opportunity for both ABC and the locations they choose. "We have a team of producers who are responsible for the outreach to destinations, tourism boards, hotels, and airlines for partnerships," Nicole Woods, an executive producer on The Bachelor, told Town & Country. "We rely heavily on the support of these partnerships, so it’s an investment on both sides."

In order for a particular resort to waive the fees or a portion of the fees for room and board for the cast as well as all of the crew members, sometimes extra compensation is in the form of prolonged exterior shots of the resort. "I'll say, 'I want X number of exterior signage shots and I want this many name mentions [of the hotel],'" a PR director who’s worked for the network in the past revealed to the magazine. "Then, [the producers] will ask 'How much money is this displacing? A verbal mention is worth XYZ.' Both sides are trying to pump up that dollar amount."

Rest assured, there are bound to be a ton of exterior and interior shots of Becca’s fantasy suite dates location in Thailand, likely in a very Cribs-esque style we’ve already seen this season. But there's no denying that The Bachelor franchise picks some of the best locations.