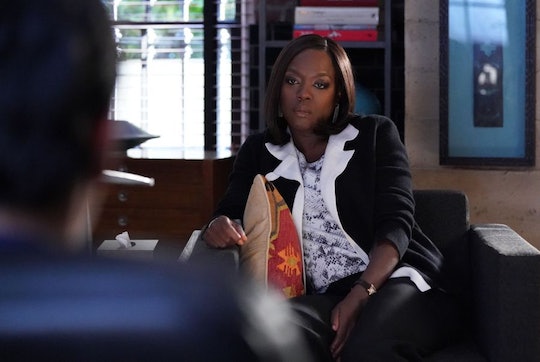 By now, any dedicated How to Get Away with Murder fan knows the formula of each season, with a murder and flash forward scene provided episode-by-episode to allow the whole story to reveal itself. For Season 4, though, there may have not been a murder but instead a crime of a different kind with Laurel’s missing baby. And now that Annalise is also possible missing, where is Annalise in the flash forward on HTGAWM? Things aren’t looking good for her right now and she could be in serious trouble too.

So far, the evidence fans have to go on is the bloody handprint in the elevator outside of her hotel room and the gun that was found in her suite. But since it was mentioned in passing when Bonnie was walking through the crime scene, it’s not clear yet if the gun found in Annalise’s hotel room was a murder weapon or her private form of protection against intruders. But something bad obviously went down before she vanished. Even though the writers were so bold as to kill off Wes last season, I highly doubt they’d do the same to Annalise of all people, so the big question now is, where is Annalise in the flash forward?

When Bonnie peered into the elevator in the flash forward at the end of Season 4 Episode 2, there was a decent amount of blood. Not a deadly amount really, but enough to be pooled on the floor and then trail up the wall. If this is Annalise’s blood but she’s nowhere to be found (since Isaac tried and failed to get ahold of her on the phone), then whoever hurt her could have taken her somewhere else. Wherever that might be is still up for debate, but if it was, say, Laurel’s father or his henchman Dominic, there could be other plans for Annalise that require her to be alive.

Another plausible option is that Annalise took Laurel’s baby and skipped town in order to protect the infant from whoever attacked her (or Laurel) in the elevator at the hotel. In this scenario, Laurel could also be in on it and totally faking her anguished cries for her baby, but it’s probably too soon to tell for sure.

HTGAWM executive producer Pete Nowalk spoke to Variety about the show’s latest mystery of the season and how it’s going to impact the characters moving forward. "It all starts with Annalise," Nowalk said, referring to Laurel waking up on the hospital bed. "There will be an intersection where we see where everyone is on that night and how the stories converge. But her not being there is part of the mystery. Why is she not there? Did she have something to do with this?"

But getting back to all of that blood — if Annalise isn’t hurt and instead hurt someone else, then she could be on the run for fear of getting caught, Then again, I hardly think the remaining seasons of the show would work with Annalise gone or living as a fugitive. It’s clearer than ever, though, that she’s going to be at the center of the big mystery for HTGAWM Season 4.

The worst case scenario (and one that’s no doubt gone through many viewers’ heads) is that Annalise took Laurel’s baby and ran off. But as many problems as Annalise herself has had in the past, she’s not someone who would steal a baby. Like Nowalk said, though, Annalise is going to be at the center of the night shown in the flash forward on HTGAWM Season 4, so once we find out where she is, things will likely start to come together.