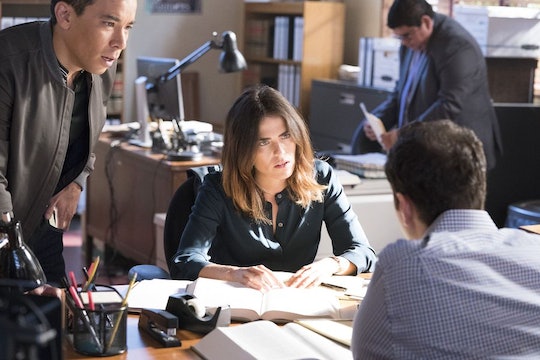 How to Get Away with Murder is known for its flash forward sequences to give viewers a new mystery to uncover each season. For Season 4, it’s no different, but this time it’s a matter of where someone is rather than who died. Which is, honestly, a nice change. But I’d be lying if I said it wasn't necessary to start piecing together the clues about the flash forward on HTGAWM Season 4, since things will probably start to come together very soon.

While it’s not exactly to the caliber of LOST, which had fans asking a dozen new questions by the time the screen turned to black at the end of each new episode, HTGAWM Season 4 does already have fans wondering about some favorite characters. Like Annalise, who is suddenly missing in the flash forward, and then there’s Laurel’s baby who is also apparently nowhere to be found. The good news is that we get five or so minutes at the end of each episode to see another snippet of the flash forward. And for the mountain of questions fans have regarding the events of the next few months on the show, there are some legit clues about the flash forward on HTGAWM Season 4 that could help in answering them eventually.

Laurel's In The Hospital

Laurel is clearly in a hospital room, but very possibly, in a psych ward. Since the hall and room are very plain and stark white and there are no other patients around, there’s a good chance that Laurel is in some sort of mental health facility, which could be part of a hospital.

It’s also important to note that Frank is immediately by Laurel’s side once she wakes up screaming for her baby. In present day, he’s still struggling to make Annalise let him back into her life and he spends his evenings parked outside of Wes’ apartment that Laurel took over. Obviously something changes in the three months or so leading up to the flash forward that makes Frank become part of Laurel’s life again.

Before Episode 2, Isaac seemed like a well meaning therapist for Annalise to connect with. But now that he’s in the flash forward, he’s likely going to be more important as the episodes progress. It also makes you wonder if he isn’t already working with someone else like Frank or even Laurel’s father.

Since we now know that Annalise’ hotel room on HTGAWM is an official crime scene and that there was blood left behind, this clearly isn't just a case of a missing infant. There was a struggle or fight of some kind and now Annalise is missing too. That, or she’s playing a clever game of Gone Girl to create a crime scene for another reason.

During the flash forward at the end of Episode 2, after Isaac leaves a voicemail for Annalise, we see her hotel room, which is now a crime scene. As Bonnie surveys everything, from the taped-off apartment to the bloody elevator, you can hear a police officer in the background or on a walkie talkie say, "One item of interest found is a gun." Obviously that would potentially explain the blood in the elevator, but it also makes it sound like there’s a definite bad guy or girl on the loose.

The flash forward on HTGAWM Season 4 is three months into the future, which is two months before Laurel is actually due to give birth. This could mean any number of things, but it does narrow down some of the possible reasons she’s no longer pregnant. She might have lost the baby early due to some kind of accident, or she went into early labor because of something related to her father or even Frank, or someone forced her into early labor in order to steal her baby. I know, that got dark pretty fast, but with HTGAWM, you never really know for sure how far they’re going to take it.

There’s still plenty of details to uncover about the night Laurel wakes up in the flash forward, but there are enough clues already to start to try and figure out what happened or, at the very least, theorize about what happened to Laurel’s baby and now, Annalise as well. Despite any questions fans might still have though (and there are definitely a lot), Season 4 of HTGAWM is off to another mysterious and exciting start.