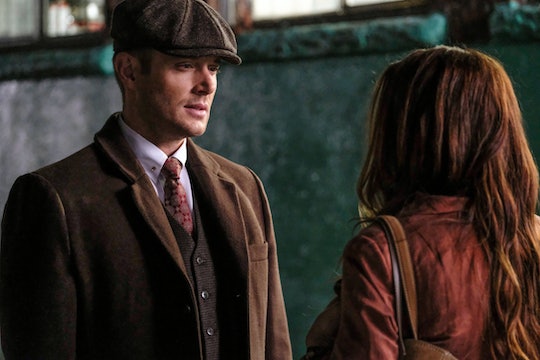 Jensen Ackles has played the same character on Supernatural for the past 13 years, but now that Dean has been possessed by the archangel Michael, his lighthearted character is nowhere to be found. Michael might look like one half of the demon fighting brother duo, but where is Dean on Supernatural? He's not completely gone, but for now, his mind and soul are trapped inside of his body with Michael in the driver's seat. In the Season 14 premiere, Sam asked Nick what it was like when Lucifer took over his body and he said he couldn't remember much. This means that Dean is probably still inside his own body, but with no control over anything.

Physically speaking, however, Dean/Michael could be anywhere. He seems like he's on a mission to build an army of some kind. In the premiere episode, he was seen visiting humans, demons, and angels in order to see if they would be fit for something. Maybe he’s creating an army or just looking for followers so he could, as he told Lucifer, "do it right this time." So while Sam might not be able to find him now, something tells me that death and destruction will lead him right to the demon inhabiting his big brother's body.

Judging by the Season 14 premiere, Michael, in Dean’s host body, has been busy traveling the world asking people what they want out of life. If they try to lie to him, like Sister Jo’s flippant claims of wanting designer labels and more money, then they’re of no use to him. But by the end of the episode, the one being who was honest, a vampire, seemed worthy of Michael’s guidance. And things could get a lot worse before they get better.

Supernatural executive producer Andrew Dabb told TVInsider that Michael’s plans as Dean will be revealed soon, but that fans can expect some bad intentions. "He has no counterbalance now that Lucifer’s dead, along with every archangel other than our world’s Michael, who is locked in Hell," Dabb said. "Once he understands [this world], he can start working a more malicious agenda. He shares a lot with the other Michael, who wanted to purify the Earth of everyone but his chosen 5,000 people. This Michael is even scarier."

Right now, it looks like vampires will be part of Michael’s chosen people.

It was clear from the premiere that Sam has been spending most of his spare time searching for Dean. From that oh so sad image of him driving the iconic Chevy Impala alone to looking so defeated at the end of the day with no word on his brother, Sam’s mission is focused on finding Dean and helping him. It seems like right now, Michael doesn’t want to be found, but eventually, his actions will undoubtedly lead Sam right to him. Like Sister Jo’s worried phone call about Michael being a "problem," eventually Sam will be able to follow the breadcrumbs to the archangel who took over his brother’s body.

Fans can probably expect several more episodes of Sam searching for Dean before they actually come face and he gets his first chance to try and fight for his brother. Jared Padalecki, who plays Sam, said at the San Diego Comic Con that since Sam knows next to nothing about Michael’s plans on Supernatural, he’s left working with everyone from the apocalypse world. "They have some leads and they’re following each and every one," he said. "Even if that lead is a dead end, it’s still not a complete dead end. It will be like, 'Okay, we’ve got to solve this problem.'"

But until Sam gets any real clues about where Dean is or what Michael is doing with his body, it’s like a race against time to stop the world from ending. Again.