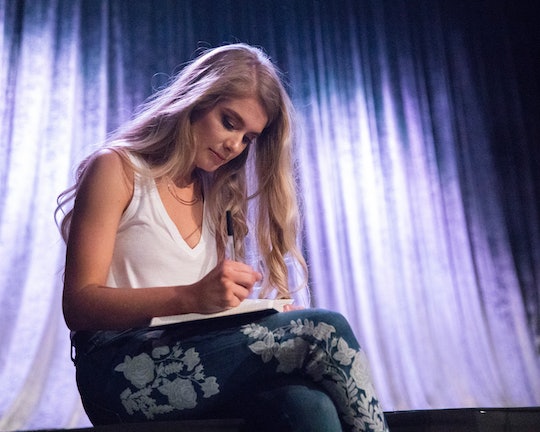 Demi On 'The Bachelor' Is Becoming A Fan Favorite

If there's one Bachelor contestant this season to keep your eye on, it's Demi. She comes through every episode ready to get in her time with Colton and make the most of her experience on the show. Yes, she's ruffled some feathers, but you don't get the Bachelor to fall in love with you without rubbing some of your competition the wrong way. Because of her attitude, some fans might be wondering where Demi on The Bachelor is from and if her hometown might play a role in how assertive and fearless she is when it comes to Colton.

According to her Bachelor bio, Demi is from Texas, but she's definitely not your average southern belle. In fact, she actually gets extra Bachelor brownie points for not mentioning that she's from the south every 30 seconds or talking about how The Bachelor is so different from where she's from in the country. But she's definitely a country girl at heart.

Not only is she from Texas, where she likes to fish and ride ATVs (can I come over for a playdate maybe?), but her hometown is a small rural dot on the map. That being said, it's only a 22 minute drive to Dallas, which likely explains why Demi is like the perfect mix between a country woman unafraid to get her hands dirty and a Bachelor contestant ready to speak her mind.

Red Oak might not be ghost town level of small town, but the 2010 census recorded 10,769 residents. It's in the northeast region of Texas and is 15 square miles total. Although a population of almost 11,000 might not seem like a lot, making Red Oak a small town in that regard, that number was 4,000 in 2010 and is expected to rise in the next 10 years.

If Demi makes it to hometown dates on The Bachelor, I'm sure viewers will get a closer peek into how she grew up living that small town life. Right now, however, it looks like she may have relocated to Dallas. Her Instagram bio says she lives in Dallas, so if that's not just meant as an indication of her region of Texas, Demi traded her small town atmosphere for big city living at some point.

Although Demi still lives in Texas, it looks like she's done a fair amount of traveling lately. She has posted Instagram photos in New Mexico and California recently, but as a Bachelor contestant, traveling to promote the season comes with the territory.

While it's still not clear if Demi will make it all the way to hometown dates or beyond this season, she has definitely been given enough screen time to make fans want to see more of her in The Bachelor franchise. So if she isn't currently engaged to Colton, I wouldn't be opposed to signing a petition to make sure she's one of the first contestants on Bachelor in Paradise this summer.

Demi might have been given a partial villain edit on The Bachelor, but it's the Krystal dilemma all over again. On Arie's season of The Bachelor, Krystal was guilty of constantly stealing Arie "for a sec" and sometimes monopolizing his time because other women weren't quick enough. On The Bachelor, the name of the game is getting your time in while you can and as Demi told some of the women Monday night, you have to be assertive and get in your time without being asked.

I don't know how Demi will fare on The Bachelor in the coming weeks, but if she and Colton aren't endgame, I'm sure this won't be the last we see of her.