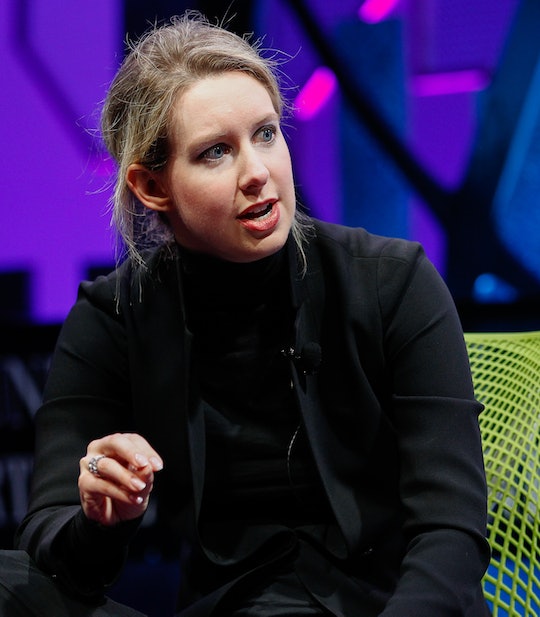 Elizabeth Holmes, the subject of HBO’s documentary The Inventor, was once called the next Steve Jobs thanks to her innovation in founding Theranos, a company that could revolutionize blood testing. It promised to make blood testing as easy as pricking a finger, which would change the medical industry. Three years after Holmes's net worth reached $4.5 billion, however, Theranos was shut down. Naturally you have to wonder where Elizabeth Holmes is now and whether or not she has come back from that monumental loss.

More Like This
Exclusive: Cookie Monster Puppeteer Tells Us Why Kids Will Love His New Show Donkey Hodie
Franklin Saint From Snowfall Tells A Powerful Story
Here Are 25 Shows You Can Feel Good About Your 2-Year-Old Watching
Peppa Pig Is Going Camping In A New Live Show & You’re Invited!

The Inventor paints a vivid picture of Holmes’s rise to technological fame in Silicon Valley when she founded Theranos at the age of 19 and became the world’s youngest self-made billionaire at the time. But this wasn't to last and soon her net worth dropped to zero as Theranos became the subject of investigation.

At the time, the Centers for Medicare & Medicaid Services said the company was an "immediate jeopardy to patient health and safety" and that the company’s testing procedures were coming up with inaccurate results that could endanger lives according to a report in the Wall Street Journal. The Securities and Exchange Commission accused Theranos of massive fraud in 2018 and that same year, the company was shut down, Esquire reported. A federal grand jury indicted Holmes on nine counts of wire fraud and two counts of conspiracy to commit wire fraud, according to the Washington Post. Holmes pleaded not guilty and is awaiting trial, but right now, she faces up to 20 years in prison.

Holmes’s rise and fall came fast and not without severe consequences. Before she was indicted on the charges relating to fraud within Theranos, The Wall Street Journal published an article that said the Edison blood testing device created by Theranos gave inaccurate results and that the company couldn’t be trusted in the medical field. At the time, Holmes dismissed the article and told CNBC, "This is what happens when you work to change things, first they think you're crazy, then they fight you, and then all of a sudden you change the world."

It wouldn't be long before more accusations against the company would arise, followed by multiple investigations, including one by the FBI. However, despite relinquishing control of Theranos and surrendering all of her shares of the company and possibly facing jail time in the near future, Vanity Fair reported that Holmes is optimistic.

Where she once had a multi-million dollar home and flew by private jet, Holmes now lives in a San Francisco luxury apartment and is apparently engaged to an MIT grad who works in technology. She still talks to some of her former colleagues and two former executives told Vanity Fair that Holmes said her neighbors are supportive of her future and that she can come back from Theranos' downfall.

Holmes is currently awaiting trial and upon making bail was forced to give up her passport. It sounds like she doesn't expect to do any serious jail time at the end of all of this, especially as she maintains her innocence of the allegations. ABC News reported that while Holmes awaits a trial date, she is looking for funding for a new business venture, though it’s unclear what that may be or if she will be able to flesh it out before she’s back in court.

The Inventor premieres on HBO Mar. 19 at 9 p.m. ET. and chronicles Holmes’s rise with Theranos and the company’s rapid decline, as well as never before seen footage from insiders close to Holmes. It seems like she hasn't yet given up hope that she will eventually be able to put all of this behind her, but at this time, she is still waiting for a trial date to be set.