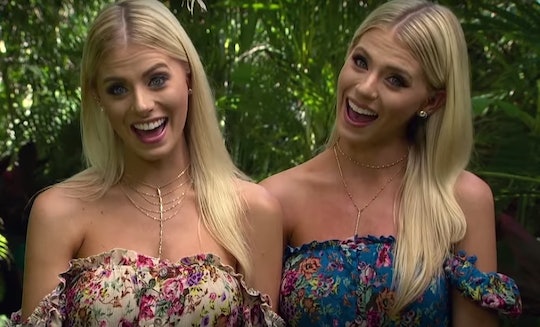 Haley and Emily from Ben's season of The Bachelor do almost everything together in the franchise. They appeared on his season together and left their mark on multiple seasons of Bachelor in Paradise. To be fair, however, Haley did come on Season 3 without her sister, and this season she is riding solo again. But where is Emily on Bachelor in Paradise? The twins might usually be seen together, but unlike Haley, Emily isn't single, so it didn't make sense for her to show up on Paradise again.

Emily is currently dating the Swedish hockey player William Karlsson, who plays for the Vegas Golden Knights. They have been together for almost two years, according to Instagram, so it's pretty official. Maybe if Emily had been dating someone casually when Haley was cast on Bachelor in Paradise Season 6, she would have joined her twin for another dose of double trouble to shake things up.

This time around, however, Emily didn't have a need to fight for roses and time with other men from Bachelor Nation. This left Haley alone in making her grand Paradise entrance, but she and John Paul Jones are basically already shacked up, so I think she is managing fine without her twin bestie this season.

Although Emily stayed home this season, she did share a post on Instagram to wish her sister good luck on another season of finding love with someone on the show. Emily wrote that she can't wait to watch Haley's journey this season and added, "Let’s not forget that if you don’t find love on this island you most likely can find it at Stagecoach next summer."

Even if Emily wasn't dating someone, she still might not have made another appearance on the show she made a negative impression on last time. When Emily and Haley were on Bachelor in Paradise Season 4, they showed up late in the game and had negative attitudes about being there while mostly everyone else was already coupled up.

Emily and Haley went into the season making jokes about the other cast members and poking fun at almost everyone. It left a bad taste in some fans' mouths, but it similarly made Emily and Haley feel ashamed about how they came across.

At the time, Haley said "Hell no" about returning to the franchise. Clearly, she had a change of heart since then, but even if Emily wasn't in a committed relationship outside of the inner Bachelor Nation circle, she might not have returned this season.

Judging by Emily's Instagram, she has also been keeping busy with Instagram ads and traveling. She also has three dogs and taking care of a handful of fur babies is a lot of work. Between her status as a social media influencer, taking care of her pups, and dating Karlsson, Emily is way too busy to entertain going on Bachelor in Paradise even for a cameo.

If Haley doesn't find love this time around, maybe her twin can introduce her to an eligible hockey player of her own. Haley went into this season to try and find love and, possibly, to leave a more positive impression on fans than she did last time. Hopefully she can have a more successful season. Regardless, Emily will be rooting for her all the way and it's a twin friendship anyone can stan.