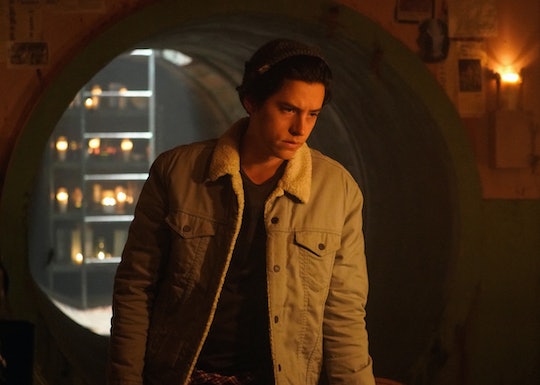 Riverdale Season 3 ended with a cliffhanger to rival those of the previous two seasons, and for a show which has become known for upping the ante every chance it gets, that’s really saying something. Most of the parents in town were arrested, murdered, or took off and there was a juicy flash-forward of senior year spring break which showed the core four minus Jughead (Cole Sprouse). Fans wondered where Jughead is on Riverdale and after the Season 4 trailer was released, there were even more questions about Juggie’s whereabouts.

The end of Season 3 showed Archie (KJ Apa), Betty (Lili Reinhart) , and Veronica (Camila Mendes) in the woods standing around a fire in their underwear and covered in blood. Archie was holding Jughead’s signature beanie and there was no sign that Jughead was near or even alive.

Betty told her friends they would burn their clothes, including Jughead’s hat, finish their senior year, and go their separate ways forever. It was juxtaposed with a present day shot of the four of them sipping milkshakes at Pop's and laughing together while promising to be "friends forever" the way carefree kids who just stopped a murderous cult tend to do.

But now that the Season 4 trailer puts more focus on what happens to Jughead on Riverdale, fans are more confused than ever about where he is and if he will make it out of the upcoming season alive.

The Riverdale Season 4 trailer starts off with a search party in the dark Riverdale woods led by FP (Skeet Ulrich), who is still the sheriff, and Jughead's friends, who haven’t yet had that bloody naked bonfire apparently. Jughead is then shown in a coffin, potentially buried alive, but still hanging on.

It’s not clear yet if one of the events is connected to the other, but fans on Reddit have suggested that Jughead could be hazed by his new prep school classmates, thus the whole being buried alive shtick. At the end of Season 3, he was invited to attend a prep school on scholarship because of his article about the Gargoyle King. I don't know how this kind of potential hazing constitutes as friendly initiation into a group of new besties, but it’s a possibility.

Riverdale creator Robert Aguirre-Sacasa opened up about Jughead’s fate at San Diego Comic-Con 2019 and said that what happens to Jughead will be important to propelling the story along during Season 4. "In the episodes leading up to it, we’re going to flash-forward to events that will [help put] the pieces together," he promised.

He also told E! News that it will be a slow burn at first to get to the mystery of what happens to Jughead, why he finds himself in his predicament, and how it impacts his friends.

"I think some of the fun of Season 4 and flashing to that is understanding and figuring out how we get to that point in the story," he said. "So it’s not something that is immediately going to happen, but we’re going to start sort of seeing threads pulled in that direction. We’re going to see what leads up to it and then we’re going to see the fallout to that scene, and that’s sort of the general shape of Season 4."

I find it hard to believe that Jughead will be killed off in Season 4, but whatever happens to him, it could tear apart his friends, even if he is found alive and well after they make a pact to go their separate ways once their senior year is over. The Gargoyle King and Black Hood are finally gone, so I don't expect another whodunnit season. The mystery surrounding Jughead’s disappearance could be just as monumental, however, and it’s hard to say where it will leave the core four by the end of the season.