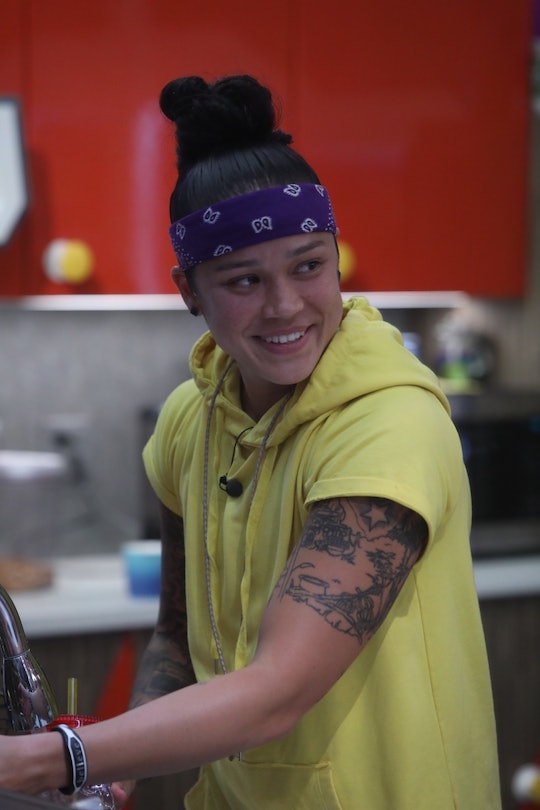 Kaycee Isn't Far From Her Hometown On 'Big Brother'

Kaycee spent the better part of her season of Big Brother in the background and a month ago, many fans had no impression of her whatsoever. Now that she's won multiple competitions in a row viewers are suddenly super curious about her and her background. You may be wondering, for example, where Kaycee is from outside of Big Brother. She no longer lives in her hometown, but she does still have strong ties to it. According to Kaycee’s Big Brother bio, she’s from San Diego, California, but she currently lives in Tempe, Arizona.

Kaycee wrote in her bio that although she was born and raised in San Diego, she moved to Scottsdale, Arizona for a girl — but they broke up just a few months after Kaycee made the move. Not one to back down from a challenge, Kaycee stayed in Arizona to make a life for herself anyway.

But before her big move, Kaycee grew up in San Diego, where she is still part of the professional women’s football team, the San Diego Surge. She’s been a wide receiver for the team since 2011 and despite living in an entirely different state, she’s still listed as an active player on the Surge roster.

Though she now lives in Arizona, it's clear that Kaycee has strong ties to her hometown — and I imagine she comes back frequently for visits. As fans saw in her intro package on the Big Brother 20 premiere, she has a close relationship with her family. She seems to be particularly close with her brother, judging by her head of household letter from home — in which he asked her to be the woman of honor in his wedding.

Kaycee may have gotten emotional when reading her letter from home, but she's managed to keep her feelings in check when it comes to her Big Brother game. This has allowed her to keep her killer athletic skills under wraps as well as build positive relationships with everyone in the house. But since it's coming down to crunch time, this is the time to start playing hard. In her bio, Kaycee said before entering the house that her strategy was to stay true to herself, avoid making herself a target, and form a strong alliance, which is pretty much what she's done. For that alone, she might have what it takes to keep the momentum going and make it to the final three at least.

Once members of Level 6 start tapering off and turning on each other, Kaycee might become more of a target for her fellow alliance members. But if she can continue to beat them at important competitions, things may continue to progress for her in the last couple of weeks of Big Brother. As of right now, if you’re in Level 6, you’re still more or less golden for the time being. But sooner or later, it’s going to come down to the wire and houseguests like JC and Sam won't be there to put up as obvious eviction nominees. Let’s just hope that Kaycee can continue to hold her own.