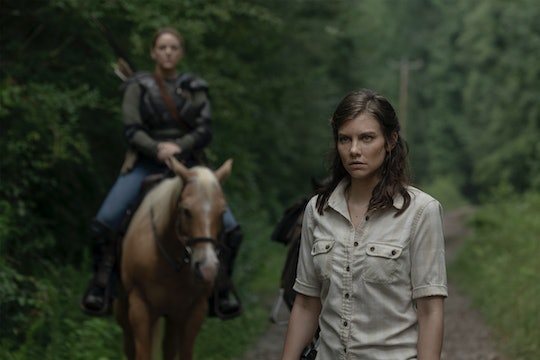 Maggie's Whereabouts On 'The Walking Dead' Are Still A Mystery

When The Walking Dead lost Rick at the end of the Season 9 episode "What Comes After," it also lost Maggie. Although she didn't get a grand exit by way of helicopter, she did walk away from finally getting justice against Negan for Glenn’s death. And, apparently, that means she walked away from everything. There was no mention of her in Sunday’s episode, which included a six year time jump. So where is Maggie on The Walking Dead and will she be back? The episode did its best to get viewers up to date on everything that had happened in the six years since what most believe to be Rick’s death.

Michonne had apparently been pregnant at the time and now has a young son to raise along with a pre-pre-teen Judith. Rosita and Gabriel are somehow now a thing. And the relations between the three main thriving communities isn't doing so great. Ezekiel makes one reference to Hilltop, where Maggie was last seen as the leader, as being detached from the rest of the established communities. And toward the end of the episode, Michonne tells the group of new survivors they found that the leader of Hilltop might take them in. But there’s no mention of Maggie by name or her whereabouts, and something’s got to give sooner or later.

Showrunner Angela Kang confirmed to The Hollywood Reporter that "What Comes After" was Lauren Cohen’s final episode of The Walking Dead as Maggie for right now. It’s unclear if or when Maggie will be back, but for the rest of Season 9, her character will be MIA. "We've been talking to Lauren and hopefully we'll get to tell more story for her," Kang revealed. "We definitely have some things up our sleeve that we'd love to do. A lot of that is just a scheduling conversation, so hopefully that will all work out, because I think mutually we would like to continue with Maggie's story, for sure."

Because of Cohen’s upcoming ABC series Whiskey Cavalier, her schedule didn’t allow for more episodes this season, but there are a number of places Maggie could be right now while off camera.

The last fans saw, she’d given up her long-awaited goal of killing Negan for his crimes against Glenn and Rick’s original group. Instead, she left him to suffer in his jail cell and live with all he’d done. But if she didn't go back to Hilltop, she might have decided to take an extended walkabout, much like it appears Daryl is doing himself. He seems to be a lone wolf once again, though it’s unclear how long he’s been off on his own. And Maggie could have taken the chance to also leave everything behind for a while.

"There's definitely a story point to the fact that Maggie is gone," Kang told IGN in a separate interview. "We know what the backstory is, and there's pieces of it that are dribbled out… We have a very clear idea of what she's off doing and what's going on, but that's part of the backstory of the story we'll be telling going forward."

Maggie might also be off with Georgie, who’d tried to recruit her before in an attempt to rebuild society elsewhere. Earlier this season, Jesus and Maggie briefly brought up her name and it could have been a way to remind viewers of her existence and that she, too, is out there somewhere. It would make sense for Maggie to be somewhere else working for the greater good and she may have had to leave Hilltop and her past relationships with the others behind after everything that had happened.

She won’t be back for the rest of Season 9, but Maggie’s whereabouts on The Walking Dead will slowly be revealed as the rest of the season plays out. Unfortunately, viewers won't get to actually see her anytime soon, but she’ll be there in spirit.