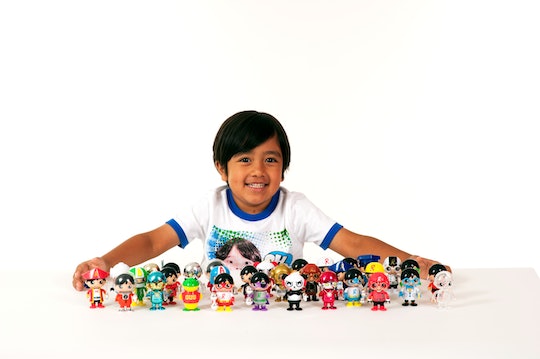 Ryan's World Toys Are Selling Like Hotcakes, But You Can Still Get Some Here

If you've got a kid between the ages of about three and six who's into YouTube videos (and aren't all kids between the ages of three and six into YouTube videos?), chances are you're well acquainted with one of YouTube's most successful channels ever, Ryan ToysReview (it does have 15 million subscribers, after all). And if you're familiar with Ryan ToysReview, then you've probably heard about the new Ryan-inspired line of toys and clothing (as in, your kid keeps talking about it nonstop). So where can you buy Ryan's World Toys? They're not available just anywhere, or at least not yet.

On the off chance you haven't seen the commercials that have been running at the end of the newer Ryan ToysReview videos (or if you just have no idea what any of this is about), this new line is the result of a collaboration between Bonkers Toys and kids media brand pocket.watch, and the items are inspired by many of the toys Ryan plays with on-camera in videos that have gotten literally billions of views: Blind bags, "squishies," character figures, and even a Giant Mystery Egg. The element of surprise is key, as are the cute characters fans of Ryan ToysReview will easily identify (Gus the Gummy Gator, Combo Panda, etc.). Ryan reportedly served as "creative director" for the line, and while I'm not sure how much creative directing a six-year-old is actually capable of doing, it's clear that Ryan had some say in designing the products that have his name all over them. (Which isn't a bad strategy for selling toys, really.)

So there's no question your kid is going to want these toys, if he doesn't already. Where can you score these playthings before they all sell out? If you've been wondering why there wasn't any Ryan stock on the shelves the last time you went to Target or your local toy store, that's because as of now, there's only one store that's officially selling Ryan's World products: Walmart.

As a representative for pocket.watch told Romper, "Walmart has the first to market exclusive until October, when the line expands to other retailers." Details about those other retailers aren't available yet, but I can only assume that there must be quite a few looking to get in on the Ryan action.

At the rate the toys seem to be selling out on the Walmart website, you can only hope there's a warehouse with a huge stockpile of Ryan toys somewhere just waiting for October. But you'll probably have to act fast nonetheless, as resellers are already offering Ryan's World toys at inflated prices all over the internet (even on Amazon). For example, the Giant Mystery Egg pictured below sells for $40 at Walmart (though it's currently sold out on the website); on Amazon, it's available for $120. Quite a markup!

And with the holidays not so very far away, it's safe to say that the same toy resellers are going to swoop in and buy up as much as they can when the line expands beyond Walmart. So unless you feel like paying three times as much for your kid's gifts, get a head start on all things Ryan.