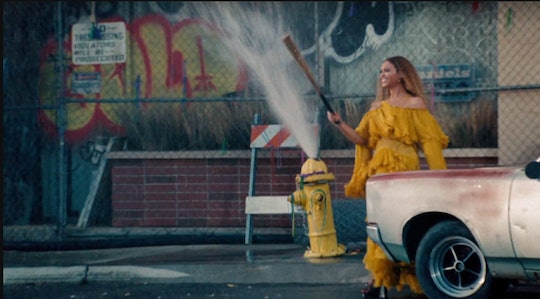 Where Was Beyonce's 'Lemonade' Shot? The Video Pays Tribute To Her Louisiana Roots

If you, like the majority of Americans, were on your couch tonight, you were probably taking advantage of your free HBO preview and glued to Beyonce's Lemonade special. The hour-long video album left members of the Beyhive asking many questions, including where was Beyoncé's Lemonade video shot?

Given that there were no "Welcome To. . ." signs in the video, viewers would have to context clues to piece together where Beyoncé shot the epic video. Luckily, you don't have to be a world traveler to figure out the majority of Lemonade was shot in Louisiana — specifically New Orleans. In the second song from Lemonade, "Hold Up," Beyoncé is seen walking through streets that have been littered with green, purple, and gold Mardi Gras beads. Though these could have been leftover from an unofficial celebration in another city, Beyoncé wouldn't be so inauthentic.

If that weren't enough, the third song "Don't Hurt Yourself," featured what seems to be a marching band walking around in purple and gold uniforms — the school colors of Louisiana State University. Add in the shots of Louisiana-like architecture, it's hard to argue that Lemonade was shot anywhere else in the world. (Well, expect for maybe a sound stage in Los Angeles. But come on now! Beyoncé wouldn't do that.)

It's no surprise that Beyoncé chose to film her video album in Louisiana. After all, the Beyoncé has multiple roots to the Creole State. For starter, her mother Tina is from Louisiana, as evident by the lyrics in "Formation." Secondly, Beyoncé and her husband Jay Z have a house in New Orleans. Who knows. Maybe some of the scenes were shot in her own backyard.

But above all else, New Orleans is the perfect backdrop to accompany the powerful messages of Beyonce's music. The singer has used her songs to send messages about sexism, racism, and classism — all problems that exists or have existed in New Orleans. By choosing New Orleans as the location of Lemonade, the city acts as another character to help drive the message further home.

With any luck, Beyoncé's video album will bring awareness to the issues the plague the city and help bring support to it.