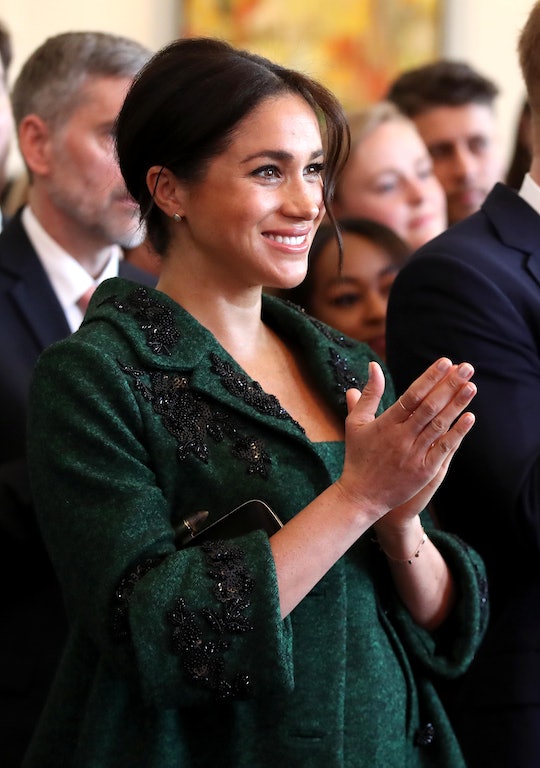 One of the most-watched pregnancies of the year will end soon, as the newest royal baby is expected to make their debut by the end of April. Along the way, there has been all sorts of questions about everything from the baby’s sex to name. And as the Duchess of Sussex's due date draws near, a lot of royal fans are also likely curious about where Meghan Markle’s baby will be born. There is a tradition regarding this among the royal family, but it’s rumored that she may be the person to break it.

The tradition actually isn’t that old — I mean, not like centuries or anything. But for a couple of decades, at least, royal expectant mothers have been visiting the Lindo Wing of St. Mary’s Hospital. According to People, Princess Anne welcomed her first baby there in 1977 and another in 1981. Princess Diana followed suit by delivering Princes William and Prince Harry there in 1982 and 1984, respectively. And Kate Middleton has had all three of her children there. Who can forget her infamous appearances on the steps outside just hours after giving birth?

So why wouldn’t Markle and Prince Harry choose this well-proven institution to welcome their first child? Well, The Sun reported that Markle wanted to keep things a little more private, with a source telling the publication, “This child will not be born at the Lindo. The talk of all the senior clinicians there is that Meghan doesn’t want to copy what Kate did… Meghan is nervous about complications such as an emergency Caesarean and doesn’t want the pressure of having to look immaculate on the hospital steps just hours later.”

So, if not the Lindo Wing, what are the options then? There are really two that are top competition, according to Hello! Magazine. Portland Hospital is where Sarah Ferguson and Prince Andrew welcomed their daughters Beatrice and Eugenie into the world, according to Hello! Magazine, noting that it’s Britain’s only private maternity hospital and that it’s favored by celebrities as well as royals.

Portland Hospital reportedly has top-of-the-line food and services, according to The Daily Mail, but it all comes with a hefty price tag, which many are willing to pay. “We have princesses from the middle east who deliver here quite regularly.” Chief Executive Janene Madden told the BBC in 2016. “We have celebrities and individuals of very high net worth and they’re used to getting what they want."

That doesn’t sound quite like Markle’s style, so another option for her is Frimley Park Hospital in Surrey, according to Metro. Though it’s a public facility, the Countess of Wessex chose it as the place to deliver her two children in 2003 and 2007, The Telegraph reported. And it’s just 15 miles from the Duke and Duchess of Sussex’s new home at Frogmore Cottage, according to Metro, putting it much closer than other options located in London.

Prince Harry was also reportedly eager to make the move and leave the “goldfish bowl” of life in London, according to Metro. And the couple’s move comes just in time to start that off on the right foot with their new baby. As a source told The Sun, "Harry and Meghan realize there is intense public interest but this baby is not a direct heir to the throne and they want the birth to be as private as possible."

That’s certainly understandable, but with so many adoring royal fans, it’s going to be a bit of a challenge. Still, it sounds like they’re going to give it their very best try and hopefully the world gives them a little breathing room as their welcome their bundle of joy.