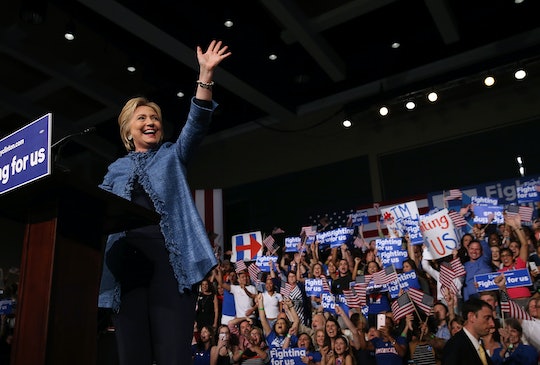 After winning big on Super Tuesday, Hillary Clinton's path to the Democratic nomination seemed assured. And then came Michigan, where Vermont Sen. Bernie Sanders pulled off what polling website FiveThirtyEight called "one of the greatest upsets in modern political history." Suddenly, Mega Tuesday took on a whole new significance for the embattled frontrunner, as pundits predicted that Bernie could work a similar magic in the important Midwestern states up for grabs. Ultimately, while the final races of the evening were a bit tight, the consensus was that Hillary Clinton had won Mega Tuesday, scoring major victories in at least four states with a tentative win in the fifth and final state, Missouri.

As you might be able to tell from its name, Mega Tuesday is pretty darn important. Voters flocked to the polls in Ohio, Florida, North Carolina, Missouri, and Illinois to do their part in settling the never-ending matter of the Democratic nomination. All in all, nearly 700 delegates were up for grabs on Mega Tuesday, with a candidate needing 2,383 overall to win the party's nomination. Clinton came into the night with a lead of about 200 delegates, and left it with a lead of almost 350. And that's not including the superdelegates everyone's so confused about.

Early on in the night, Clinton took Florida by a wide margin, picking up 122 delegates to Sanders' 60. It wasn't a huge surprise, given that Sanders does best with young voters, and no one thinks, "Hey, mecca for millennials!" when they think of Florida. Not long after, Clinton claimed a similar landslide in North Carolina, continuing her strong showing in the South, before eventually being declared the winner by NBC News and a host of other outlets, after the close race in Missouri.

But the real moment the Clinton campaign breathed a sigh of relief came with her victory in Ohio, where Sanders had been hoping to pull off another upset victory. Though Clinton had once been considered a shoo-in for the Ohio votes, Sanders surged in polls there in recent days. An Ohio victory would have bolstered his narrative as the outsider with a chance to sweep the whole election, whereas his loss makes it seem unlikely that he'll be able to catch up to Clinton's delegate count.

Still, Mega Tuesday wasn't all bad for Sanders. He more than held his own in Illinois and Missouri, which remained too close to call for most of the night. There's still a path to victory for him, albeit a difficult one.

Still, in Clinton's victory speech, she only touched briefly on Sanders before moving on to Donald Trump, making it clear that her eyes are on the general election. "When we have a candidate for president call for rounding up 12 million immigrants, banning all Muslims from entering United States, when he embraces torture," she said, "that doesn't make him strong, it makes him wrong."

Though it's still a long road to the convention, the path just got a little easier for Hillary Clinton.