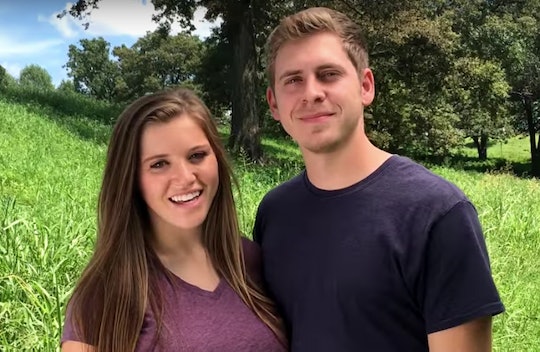 Here's Who's Pregnant In The Duggar Family Right Now

While there may be a lot of Duggar children, it's really fun to watch them all go through life on TV. But, with all those kids, it can be hard to keep track of which Duggars are pregnant now that many of them are all grown up. The Duggars first launched into worldwide fame and recognition with their hit TLC show, 19 Kids & Counting (which was originally just 18 children). And since then, they've had their fair share of scandal, intrigue, and comebacks, although perhaps their largest claim to fame is their intense outlook on dating, marriage, and everything in between.

And with so many children to keep track of, it's understandable that fans would have a hard time remembering who out of the 19 are pregnant right now. But, rest assured, there's only one Duggar who is currently pregnant at the moment, although rumors have certainly been spreading that others are also expecting.

Joy-Anna is the only Duggar to have confirmed her pregnancy thus far, according to People. And while the news surrounding her first pregnancy has certainly been mostly exciting, it's also been fairly controversial, as Joy-Anna has made it a point to post about her pro-life stances along with pregnancy updates.

And that's not the only controversy surrounding Joy-Anna's pregnancy. Many fans have been quite suspicious of when, exactly, the 20-year-old actually got pregnant, as she only married her husband, Austin Forsyth, on May 26. Fans' reasons for believing this is actually quite offensive, since a woman's pregnancy bump can look and grow in its own unique way. But fans have speculated that she looks a lot further along in the pregnancy photos she's shared than she says she is, which would mean they would have broken one of the Duggar family's cardinal rules about sex before marriage. However, when she announced a February 2018 due date, Joy-Anna quickly squashed those rumors.

Even though Joy-Anna is the only of the Duggar children to actually confirm that she's pregnant, many fans have been wondering if Kendra Duggar, who married Joseph Duggar in September, might also be expecting.

Of course, this is purely fan speculation, but many quickly latched onto the idea after a family photo surfaced on social media of the newlyweds, because Kendra was standing behind her family members, therefore possibly concealing a pregnancy bump. Even though this is far from proof and very big stretch, fans are still convinced. Again, though, this has not been confirmed.

So for now, the couple is still taking their time enjoying being newlyweds. "It’s really an amazing feeling to know it’s official and we’re really married. Once we were engaged time seemed to move so slowly and now here we are — married! We’re just enjoying every bit of it," Joseph told People back in October. And they should — they're young and in love. And if they don't want to have kids right away, that's their business and their business only.

But, in a family as big as the Duggars, it would only make sense that there would be at least one more pregnancy rumor surrounding them. Enter: Jinger and Jeremy Vuolo.

Jinger married Jeremy in September of 2016, and the two have yet to announce any pregnancy news since then, leading many fans to wonder why. And while it isn't anyone's business, there are still a plethora of rumors surrounding the 23-year-old and her every move, on screen, and off.

But, Jinger and Jeremy have said that, while they do want to have kids, it likely won't happen immediately. On an episode of their show, Counting On, Jinger was shopping for baby clothes for her sister, Jessa, and, according to In Touch Weekly, said:

As I look at the little shoes, it’s like, "Oh, these are so cute!" I’m thinking, well, whenever — if the Lord would bless us with kids, it would be amazing. Now I know where I can do my shopping.

But, for now, only Joy-Anna has a confirmed pregnancy — and that's plenty to keep up with.