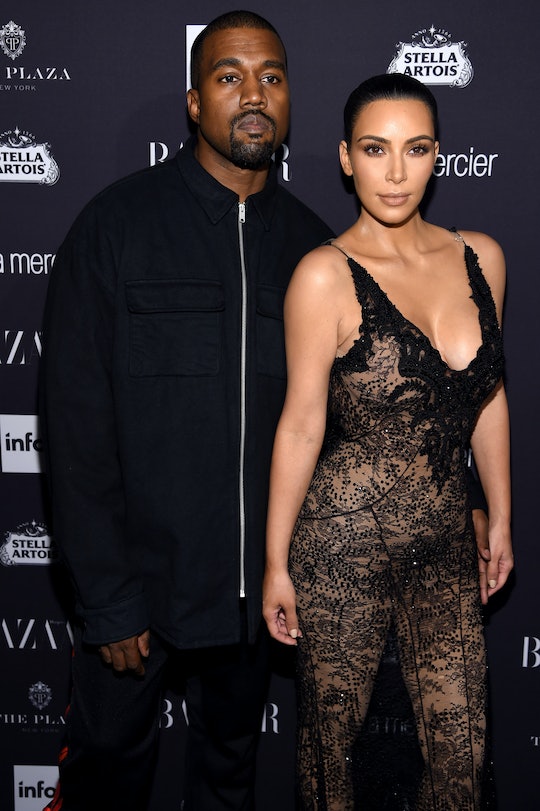 Kanye West and Kim Kardashian might be one of the most interesting celebrity couples out there. Partly because they live such a lavish life, but also because they both have such strong personalities and personas that you can't help but wonder what their life is like away from cameras. So when Kanye West appeared in David Letterman’s talk show on Netflix, fans likely wondered what Kardashians are featured on My Next Guest Needs No Introduction. West dug deep into his private life during his hour-long interview, from what he sings to his kids at bedtime to the loss of his mother and his his bi-polar diagnosis. But, as to be expected, on of his in-laws did pop up in some of the footage shot before the interview.

In one scene, Letterman visits West at his home, where West gives him a tour of his museum-like mansion and lets him try on some clothes from the Yeezy line. As Letterman is leaving the house, he and West stop to show Kardashian and her mom, Kris Jenner, his new outfit. They both praise the talk show host’s new look and he assures them with a laugh that he’s going to pay for the outfit. Unfortunately, there are no other Kardashians hanging around to give more insight into life with West as a brother-in-law, but those two cameos were probably enough to satisfy most fans of the couple and the famed family.

Later in West’s episode of My Next Guest Needs No Introduction, Kardashian is shown sitting in the front row to support him as he talks about his experience with being bi-polar. Whereas you might expect Kardashian's sisters to be sitting on either side of her, she seems to have come to the show solo. West’s and Kardashian’s kids are shown in the episode, however. They can be seen in footage from one of West’s Sunday Service shows and they seem as into their dad singing as Kardashian is. It’s pretty adorable.

There has been speculation in the past about how well West and his wife’s sisters get along. Last year after the single "XTGY" from his album Ye dropped, fans wondered how the women felt about his lyrics which said, "You got sick thoughts? I got more of 'em. You got a sister-in-law you would smash? I got four of 'em." At the time, a family insider told People that Kardashian’s sisters aren't shocked by anything he does anymore and likely didn't mind the line in his song. Judging by the fact that there doesn't seem to be any public beef between them, I’m inclined to believe that.

Still, it’s just a tad disappointing that more Kardashians didn't pop up in West’s episode of My Next Guest Needs No Introduction. It’s possible that they were simply too busy, however, so I don't think it had anything to do with West himself. Or, they just weren't in the budget of appearing on the episode. I’m sure Kardashian appearances don't come cheap.

For what it’s worth, following Khloe Kardashian’s heartache with Tristan Thompson back in March, People reported that the entire family rallied around Khloe, including West. A source told the outlet that Kanye "has the mindset that if anyone messes with one of them, they mess with them all." Side note: can he also be my brother-in-law? And not just for the clothes, although I’d take those too. It seems like the Jenner-Kardashian-West clan are one big blended happy family. So even if West’s sisters-in-law weren’t all over his episode of My Next Guest Needs No Introduction, I’m sure they fully supported everything he opened up about during his interview.