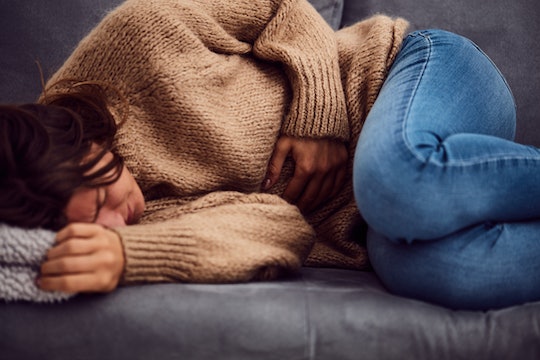 This Is Officially The Worst Trimester Of Pregnancy, According To Moms

There's no denying that pregnancy is miraculous. I mean, you are growing an actual human inside of your body. It blows my mind every time I think about it. That said, pregnancy can also be the absolute worst and anyone who says otherwise is either the luckiest pregnant person on the planet, or a complete liar. But which trimester of pregnancy is the worst? Well, as I discovered in my research, not everyone is in agreement on this question. But for the sake of all you mamas-to-be out there, I'm going to do my best to provide you with a definitive answer. It's really the least I can do while you're doing all the hard work.

I posed this question to my friends on Facebook and as expected, it really comes down to the first and third trimesters. While I did get one vote for the second trimester from a friend who had some serious complications occur during this time, most people agree the second trimester is actually a pretty great time in your pregnancy. With my own pregnancies, the second trimester was when I had a tremendous amount of energy, I was no longer nauseous (thank you baby Jesus!), I was sporting an adorable baby bump (not too big, but also not so small that people just mistook me for having eaten too many nachos), and I also really enjoyed having pregnancy sex. So yeah, the second trimester is pretty much the best.

But then you have those pesky first and third trimesters. I did an informal poll on my @mommydearestinc account and out of the 325 moms who responded, 59 percent (192 votes) said the first trimester was the worst. However, closely behind with 41 percent (133 votes) was the third trimester. And, while I would like to honor all those people who voted for the third trimester because OMG it really is awful to be huge, swollen, unable to sleep and peeing all. the. time., I must let the popular vote win (there's no electoral college in this survey) and explain why the first trimester is the absolute worst.

In the first trimester, the number one complaint is (for lack of a better phrase) feeling like complete and utter crap. Nausea, vomiting, and exhaustion were mentioned by pretty much everyone I spoke to, with the fact that you can't always cop to why it's happening as adding insult to first trimester injury. As my friend Kathryn said, "I was queasy and tired all the time but couldn’t explain that to anyone at work. So I think they thought I was just lazy." Same girl, same. My friend Samara takes it one step further when she explains why her first trimester was legit awful. "I was sick the whole time. I ate a loaf of bread every day to quell the nausea and gained 25 pounds right away. I had horrible gas. I was exhausted constantly. I was a nauseous, farting, beached whale."

And then there's the worry. Your first trimester is filled with all the fear about miscarriage or other pregnancy complications. My friend Elizabeth, who was pregnant with twins (honestly, they're the cutest things on the planet too), explains, "I was terrified that I’d lose one or both of the girls. But I felt so grateful to be pregnant, I felt like I couldn't complain." My friend Joshua echoes this, saying, "After a second trimester miscarriage the following pregnancy was terrifying. The first trimester was anxiety-inducing. I had weekly appointments with ultrasounds to ensure the new bean was sticking. It wasn’t wonderful AT ALL... after three weeks, I finally told the doctor to cancel future appointments and just surrender to what may or may not be." And that's just the thing about the first trimester, it can be so hard to surrender control and not let the fear and worry take over, particularly if you've struggled to get pregnant in the first place.

Another reason the first trimester can be so hard centers on the things you have to give up. From certain foods to your favorite adult beverage or caffeinated pick-me-up, it can be such a tough adjustment trying to navigate what's safe for baby, especially when everyone seems to have an opinion about it, whether you asked or not. But beyond those things, many women have to give up medications that are not considered safe during pregnancy, as per the University of Michigan. For two of my friends, this was the absolute hardest part of their pregnancies.

My friend Kate told me, "I had to drop off my antidepressant and it felt the way I imagine dying does. It was worth it and I did it with the supervision of my doctor, but that combined with hormones was the worst I’ve ever felt in my whole life." My friend Danielle went through a similar experience and says she wishes she had known others struggled with this as well. Whether or not to stay on antidepressants during pregnancy is definitely something you must discuss with your doctor, according to the Mayo Clinic, but just know that you are not alone, and you can get help mitigating the withdrawal symptoms.

Lastly, my friend Jessica told me that although her pregnancies were largely uncomplicated, there was something that happened in her first trimester that made it the worst. She woke up one morning, "with a complete aversion to cheese dip. It makes my heart break a little just typing it." I don't know about you, but I can't imagine too many things worse than an aversion to cheese dip! Thankfully, Jessica overcame this hardship and is now able to eat all the queso her heart desires.

So whether you're in your first trimester now, or remember it not-so-fondly as these mamas do, just know that all your nausea/fear/withdrawals/cheese dip aversions will likely subside, and hopefully the second trimester will be smooth sailing. Check back with me when you get to your third trimester so you can tell me if I'm right on which one was the worst.