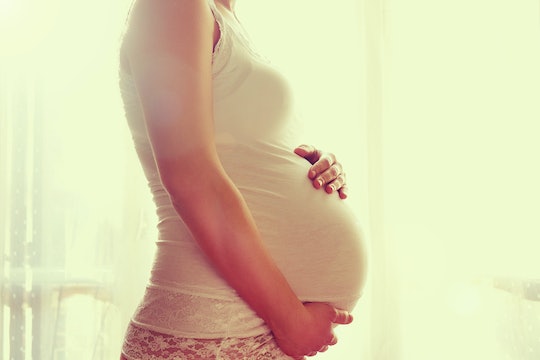 With all the poking, prodding, appointments, and tests you have to go through when you’re pregnant, you probably don’t want to even think about another injection. However, I’m sorry to say that the flu shot is something many OB-GYNs have on their to-do lists, but for good reason. If you’re newly pregnant, you may be wondering, which trimester should I get the flu shot? Turns out, there's no strict guideline, but it's pretty necessary, according to experts.

Dr. Sherry Ross, an OB-GYN and Women's Health Expert at Providence Saint John’s Health Center in Santa Monica, California, says you can get the flu shot at any time during your pregnancy, but you should especially get it done if you’re pregnant between October through May. And, yes, the benefits of getting the flu vaccine while pregnant absolutely outweigh the risks. “Some of the side effects from the flu shot can be from the injection and include a skin infection, lingering pain, and redness at the injection site. Other side effects include fainting, headache, fever, muscle aches, nausea, and fatigue,” Ross explains to Romper in an email interview.

What’s up with those claims that this year’s flu shot causes a miscarriage? That’s a pretty terrifying theory, so I asked Dr. Ross about this panic spreading across social media regarding the flu shot and alleged ties to miscarriages. “There have been many studies suggesting a connection to the flu vaccine and miscarriage. To date, the findings in these particular studies are confusing and unsubstantiated. The flu vaccine does not cause miscarriages,” Ross says firmly. When asked which risk is higher, having a miscarriage, or not getting the flu shot and getting the flu while pregnant, Ross says, “No question about it. Getting the flu during pregnancy has many more risks to not only you, but the baby. Get vaccinated.”

What are those potential pregnancy complications you can have if you happen to get the flu while pregnant? “The flu is more likely to cause serious illness in pregnancy compared to those women who are not pregnant. In pregnancy, there are changes in the immune system, heart, and lung function that make pregnant women more prone to severe illness from the flu, which can lead to hospitalization or even death,” Ross says. “Other problems as a result of the flu include dehydration, miscarriage, and preterm labor. But a flu shot can protect pregnant women, their unborn babies, and even the baby after birth.”

As far as the type of flu shot, is it one size fits all, even for pregnant women? Do you have to ask for a certain type with a specific strand or anything? Looks like your OB-GYN will have you covered. “The current flu vaccine protects against the four most common flu viruses including two influenza A and two influenza B viruses. There is no need to ask for a specific strand of the flu shot, since this is the primary vaccine given,” Ross notes.

Looks like it’s probably a pretty good idea to get that flu shot while you’re pregnant, and that the reported (and proven) side effects are definitely not as bad as what could happen if you don’t get vaccinated. What’s a little more nausea and fatigue instead of possible hospitalization or even death? You’re probably a pro at this nausea thing by now anyway, right? What’s one more needle during a long line of needles during your pregnancy? You got this.