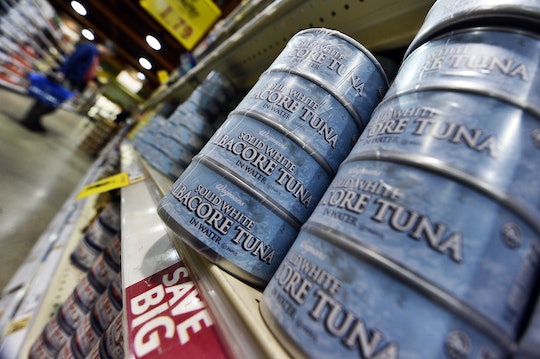 Which Tuna Brands Were Recalled? They're All Still Safe To Eat

There's one less thing to worry about while prepping your kids' lunches this weekend. Following an initial report that three different tuna brands were recalled this week, after officials deemed the tuna "undercooked due to an equipment malfunction", it seems the possibility of food-borne illness has been dismissed. Still, if you're hoping to play it extra-safe, and want to know which brands were included in that recall, there's an easy way to find out.

So far, Bumble Bee, Tri-Union Seafoods, which packages Chicken of the Sea brand tuna, and Hill Country Fare have all recalled certain UPC codes of their cans (as of press time, no illnesses have been reported in connection with the recall). All three companies have issued separate statements with one unifying message:

These deviations were part of the commercial sterilization process and could result in contamination by spoilage organisms or pathogens, which could lead to life-threatening illness if consumed.

Hill Country Fare is recalling over 10,000 5 oz. cans of tuna sold out of Texas based H-E-B stores between Feb. 24, 2016 and March 16, 2016 and Bumble Bee has recalled cans with certain UPC codes sold within the same time frame. The same goes for Chicken of the Sea, which is recalling over 107,280 cans of tuna with specific UPC codes sold within that same three week time frame.

It was routine quality assurance checks that led to the finding in the first place, according to a local Pennsylvania Fox affiliate. "During a routine inspection, it was discovered there was a malfunction in a machinery part," said John DeBeer, vice president of Quality and Compliance for Chicken of the Sea, in a statement to the news outlet. "That part has been replaced, and the proper functionality of the machine verified.”

Sounds scary, right? Turns out there's very little reason to worry. All three brands recalled their tuna out of "an abundance of caution", rather than concern over existing cases of food-borne illness. So before you freak out about not noticing the UPC code on your tuna can before you made (and enjoyed!) some tuna salad in the past weeks, remember this: According to a Bumble Bee statement, you could only really get sick if you ate it past it's "best by" date. (And who besides a penny pinching grandparent does that anyway?)

This weekend, feel free to make your tuna sammies and pasta salads as always. Just double check the UPC code and expiration date first, because seriously, tuna is stinky enough.