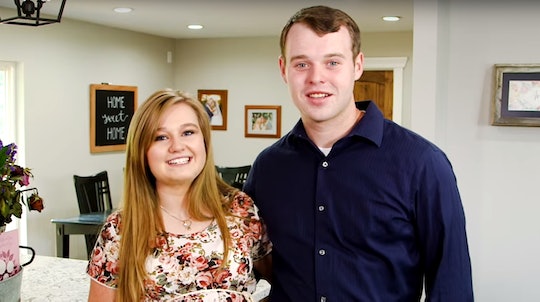 If You're Curious About Who Kendra Duggar's Parents Are, Here's The Scoop

It’s hard to keep track of all the pregnancies and babies happening in the Duggar family these days. And Counting On fans were treated to one more piece of joyous news recently when they learned during Kendra Duggar's birth special on TLC that her mother was also pregnant at the same time she was. There are just so many questions. Are Kendra and her mom close? And just who are Kendra Duggar’s parents anyway?

Kendra’s mom and dad are Paul and Christina Caldwell, according to In Touch Weekly, and Kendra is the oldest of their seven children. It can be assumed that Kendra and her mom are very close, since Kendra included her mom as a bridesmaid at her wedding, according to People. That’s kind of to be expected for anyone the Duggars allow their children to court, which is the supersized family's conservative form of dating. It seems like a tight bond between parents and kids is part of the fundamental values that underpin the Duggar’s way of life.

The Caldwells were married in 1998, according to In Touch Weekly, when Christina was 18 and Paul was 20. Kendra is now 19, so if they had her that first year they were married Christina would be in her late 30s now, still young enough to be having an eighth baby. The young couple are now grandparents, as Kendra and Joe welcomed their first child, a son named Garrett, in early June, according to Us Weekly.

The Caldwells and the Duggars were in loosely acquainted circles of friends according to Joe and Kendra’s website, and became closer over time. Joe said that in 2015 his family began attending the church where Kendra’s dad is the pastor. Though he became close to her father it was a little while before he took notice of Kendra and began to look at her as a love interest.

According to the church’s website, Paul founded the church, Lighthouse Baptist Church, in 2008 in East Fayetteville, Arkansas. Additionally, Paul made a run for political office, as Inquisitr reported, and launched a social media campaign in pursuit of becoming a state representative from Arkansas in 2014.

As for Kendra's mom, Christina, not much is known about her besides the fact that she has been very busy raising her large family. There are seven kids in all and she is likely currently pregnant with her eighth, a fact that was revealed during the Counting On birth special. She certainly knows a lot about giving birth and during the episode she can be seen coaching Kendra on breathing during labor.

"It's allowing you to get oxygen, so that your muscles can do what they need to do," Christina can be seen telling Joe.

"It's so cool to have my mom, she knows all about the breathing and how to get through the labor. She's done it several times," Kendra commented. Then she revealed:

We found out my mom was expecting about a month ago. I think this has definitely been really interesting because we've been able to share a lot of things that we didn't get to share before so I feel like we've become even more like friends. And I guess our relationship has gone to a different level, I guess.

It is very cool to see Christina in such an active and caring role during Kendra's labor.

If there’s one thing fans have learned from the Duggar children it is that while they are like their parents in many ways, they are also very distinctly their own people. So while Kendra has no doubt been influenced heavily by these two very important people in her life, it will be interesting to see how she and Joe grow and shape themselves as parents for themselves.