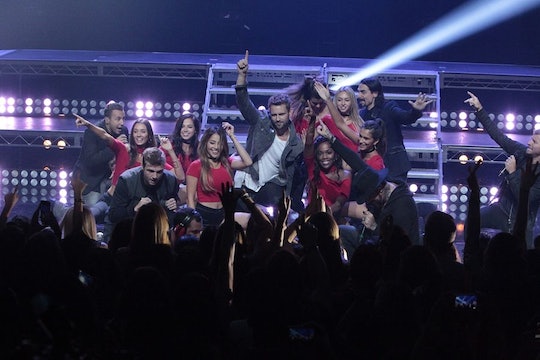 If it seems like just yesterday that the women were exiting the limo on The Bachelor and giving Nick weird gifts like raw hotdogs and maple syrup, that's probably because in airtime, it was legit just a few weeks ago. But now that Nick's hometown dates on The Bachelor were revealed (at least we thought they were anyway), it's the best indicator that it really is coming down to the wire. Of the 30 women the season started with, just Corinne, Rachel, Vanessa, and Raven are left to participate in the Bachelor hometown visits and get really tested on if Nick should choose them to go further to the fantasy suite dates in the weeks to come.

But with the end of Monday's episode leaving off on a pretty big cliffhanger, there could very well be just three hometown visits in Nick's future. Corinne herself said that he has been "very unpredictable" this season, and I can't even remember the last rose ceremony, so Season 21 is definitely playing by its own rules. The promo made it sound like the fate of that decision was still up in the air, which has left fans confused.

Each of the possible contestants with hometown dates have made their mark on the season and on Nick in their own ways, so it's not a real shocker for the four of them to have made it this far. Rachel and Nick go way back to the first impression rose and Vanessa had that zero gravity date with Nick that was equal parts awesome and awkward after she threw up, but still got kissed afterward.

So now that the promo shows that Nick's hometown dates on The Bachelor could be narrowed down to just three, it's time to speculate on how much of a chance each remaining woman has of making it even further.

Corinne was making people talk long before she made a dent in Nick's heart. She's never been shy about who she is, what her life is like, or her very real attraction to Nick. That being said, although a lot of her actions have gotten her quite a bit of attention, it's clear that at the core of it all, it has come from a place of real interest in this year's Bachelor. He's obviously kept her around this long for more reasons than her good looks and enthusiasm for naps.

The connection between Nick and Rachel was obvious from the get go. I mean, he didn't give her a first impression rose for nothing. They had chemistry right away and their one-on-one date in New Orleans kind of solidified that. Honestly, Rachel is one of the only contestants I can see Nick with out in the real world.

There wasn't a whole lot to Vanessa and Nick until they had their date in the zero gravity plane and their "relationship" was tested with her motion sickness. But somehow it brought them closer together and later, when Vanessa confronted Nick about Corinne and how she was getting to the other women, he was quick to want to make her happy again. Kind of adorable.

Raven is probably most well known for catching her then-boyfriend in bed with another woman and proceeding to beat him with a stiletto, but aside from that lapse in judgment, she's been a steady presence on The Bachelor this season. It's too easy to fade into the background when there are a dozen other women competing for your "boyfriend," but Raven has managed to stake a real claim to Nick.

Even for those who have kept up with their Bachelor fantasy rosters, it's probably hard to say who will win after all this. And if Nick really is going to just move forward with three for hometown visits, that's going to make it even harder. But Nick's Bachelor hometown dates will be the real indicator of who can get him down on one knee in the end.