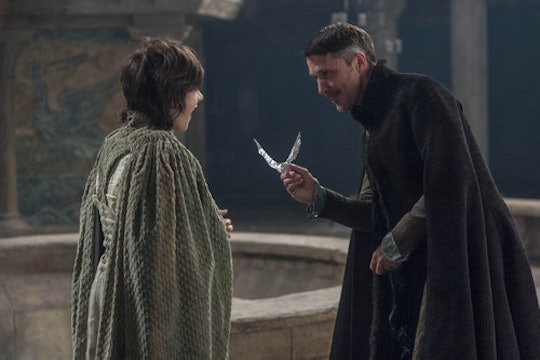 Who Are The Knights Of The Vale On 'Game Of Thrones'? They're More Important Than Ever

On Sunday's episode of Game of Thrones, during the Battle of the Bastards, Jon's army was just about defeated when a huge army on horses rode in, breaking Ramsay's formation and basically saving the day. It probably took viewers a minute to figure out who they were, but seeing Littlefinger ride up next to Sansa let us know that they were his army from the Vale. But who are the Knights of the Vale on Game of Thrones? If you remember, Littlefinger was married to Lysa Arryn for a little while before pushing her through the Moon Door and to a certain death. Her only child, Robin Arryn, inherited the Vale, but as someone who is not only a child but also not all "there", he's needed someone to guide him. So obviously that's trusty Uncle Petyr Baelish. Because Baelish can't not insert himself where it benefits him.

A few episodes ago, Petyr convinced Robin to approve the Knights of the Vale to help Jon Snow, and his army and since Sansa is also Robin's cousin, the kid agreed. Then, in Episode 8, Sansa was seen writing a letter to someone for help who, as it turns out, was her old friend Petyr Baelish. To his credit, he did save the day with his Knights of the Vale barreling through Ramsay Bolton's army and effectively helping Jon. There is the question of what Petyr will expect in return — ahem, possibly Sansa's hand in marriage — but regardless, it was his doing that made it possible for the Knights of the Vale to save Jon and his army.

They Are From The Vale

When the Andals first came to the continent of Westeros thousands of years ago, the Vale is the first place they discovered, and then spread out from there. Think of it as the Plymouth Rock of Westeros. Only, with lots of mountains and random flat areas to set up villages. Since most of the people of Westeros are of descent from the Andals, those in the Vale are said to be of the purest form.

They Played A Huge Role In Overthrowing The Mad King

Some 20-odd years ago, Ned Stark, Robert Baratheon, and Jon Arryn led the Knights of the Vale in overthrowing the Mad King Aerys Targaryen. We all know that Jaime is the one who finally ends up killing the king, garnering him the nickname of "Kingslayer", but the Knights are the army who followed behind Ned, Jon, and Robert in the battle to take the crown from the Targaryens and won.

They Can Maneuver Around Almost Anything

The Vale is made up of tons of high and low mountains, with flat land not being found until far below. Thus, the Moon Door having such a significance in the Eyrie, which is House Arryn's castle in the Vale. An army whose horses can navigate the huge, jagged mountains is a pretty killer (pun intended) group.

They Are Now Under The Control Of Lord Robin Arryn

We never really met Jon Arryn on Game of Thrones, since he died right at the start of the show, but he was married to Lysa, Catelyn Stark's sister, and had also known Littlefinger as a kid. It was later revealed that Littlefinger is the one who convinced Lysa to poison him, taking Baelish as her husband soon after. Then, he killed her, making Robin Arryn, the son of Lysa and Jon, the Lord of the Vale. But with Petyr Baelish as your smooth talking and manipulative step-dad, you get to share that power of course.

The Knights of the Vale are a large Northern army in Game of Thrones and the very one who stepped in to save Jon and his Wildling friends in the Battle of the Bastards. They were like the Hail Mary of the Bastard Bowl, but they got the job done. And the fact that Littlefinger can so easily gain control over an army like that is pretty scary, considering he came from no noble background and used to lurk around King's Landing as a brothel owner.