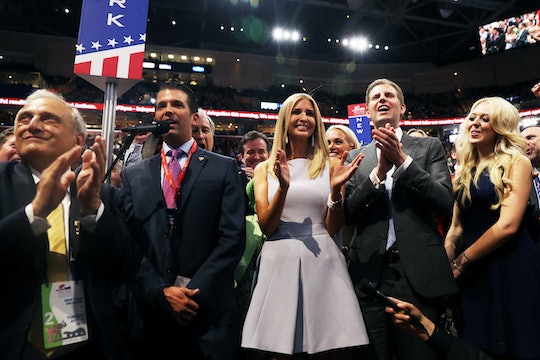 Who Can Get Top Secret Clearance? Donald Trump Wants His Children In On Everything

There's one thing almost everyone can agree on when it comes to President-elect Donald Trump and it's that he isn't afraid to ask for what he wants. Trump is now reportedly asking for security clearances for his children, which begs the question: Who can actually get a security clearance, and is Trump's request even feasible? On Monday, CBS News reported that the Trump transition team had reportedly inquired with the White House about the security clearances for the three elder Trump children, all of whom were essential advisors throughout his campaign. There are nepotism clauses that prevent Trump from appointing his children, Ivanka, Donald Jr., or Eric, to a position in his administration, but apparently he wants them in on as much information as possible. (The real question is, does he want 10-year-old Barron to help him do his national security homework, too?)

To get a clearance, individuals have to go through a questionnaire called the Standard Form 86, Questionnaire for National Security Positions (along with a bunch of other forms, no doubt) and a background check. But again, applicants also have to be employees of the State Department. Trump's children will not be. In fact, there is word they will take over running the Trump Foundation and the family's various business interests.

That alone is a call for some checks and balances when it comes to conflicts of interest. They should first pass the sniff test on that regard before they get access to any binders of information about the United States' dealings abroad.

Technically, the children would have to be named national security advisors, since the Department of State administers them to get them clearance, but when Trump is inaugurated and takes his seat in the Oval Office, he can request they go through the process himself. This should make even the most fervent Trump supporter go, "errrr, what," if only because Trump raged for an entire election cycle about Democratic presidential candidate Hillary Clinton's misuse of a private server while serving as Secretary of State and clutched his proverbial pearls about the sanctity of classified information. Now we want non-politicians with no experience looking at top secret information? It's worth considering.

It's great that Trump has so much respect for his children that he has allowed them to be a vital part of his winning the presidential election, but if they aren't technically working in the State Department, there is no reason they should be allowed access to classified or confidential information.

Even Ivanka said in a 60 Minutes interview this weekend that she plans on just being a daughter while her father serves as president. “I’m going to be a daughter. But I’ve — I’ve said throughout the campaign that I am very passionate about certain issues. And that I want to fight for them," she said. (Let her sell her clothes and run her business already, okay? And seriously — Trump himself has fumbled about whether a big "C" means confidential or classified. Let's first get the new president situated, right? That alone is might be problematic.)

Despite all this, the president-elect could still go forward with a request once in office. Trump's children, Ivanka, Eric, and Donald Jr. were in on the most detailed workings of the campaign, so it makes sense they'd be first in line for any potential clearance grants. But would Trump also want a clearance for Tiffany, who has not been involved with the family's business affairs until she was brought on to stump for her father? There are a lot of good questions to ask.

Again, these are big questions that need answering, if only because national security and who was able to access said information inside the Clinton team was such a huge talking point and rallying cry for Trump on the campaign trail. It would be a double standard to just request clearances for his children, who have no immediate need for them, especially when he's still fresh off of belittling Clinton's staff from her tenure as Secretary of State (who by the way, were actualy employees of the State Department).

Trump asking for security clearances for his children would be a very big way to tell the American people that he has little regard for national security. Let the Trump children run the real estate business and, in Ivanka's case, the lifestyle company as well. But let's get serious when it comes to what's a reasonable action to take in the first 100 days in office and what's not. Getting a security clearance is a privilege, not a birthright.