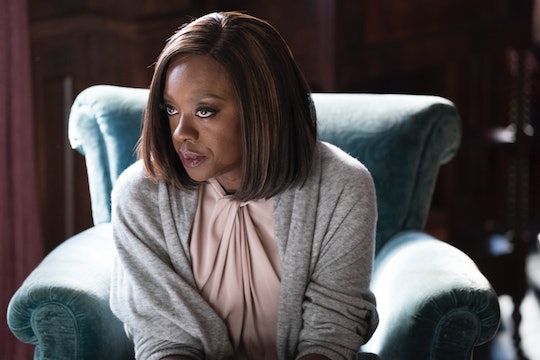 Here's Who Could Die In The 'HTGAWM' Season 4 Finale

There have been more than enough plotlines in How to Get Away with Murder Season 4 to hold pretty much any fan’s interest, but now that it’s all coming to an end, it’s time to think about how the season is going to wrap things up. Creator Pete Norwalk recently tweeted that with the finale will come "one more death," so who dies in the How to Get Away with Murder Season 4 finale? Someone isn't going to be making it to Season 5 and, as to be expected, there are a number of possible characters who could be the victim Nowalk was referring to in his tweet.

Right off the bat, you have to kind of assume that the person on the chopping block is also the one who was in the terrible car wreck at the end of last week's episode. Viewers were made to think it was Bonnie, but it could have also been Tegan. Or, the death Nowalk was referring to doesn't even have to have anything to do with the car wreck and really anyone’s life could be in danger at this point. Since that accident itself is still so new with so little to go on, though, I’m just going to assume that there’s more than just Bonnie and Tegan who are in danger of dying during the HTGAWM Season 4 finale. So let's look at our options, shall we?