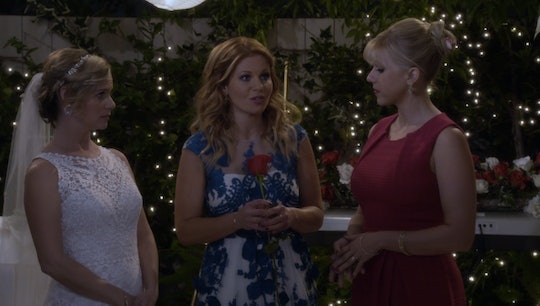 Who Does D.J. End Up With On 'Fuller House'? Her Choice Is Pretty Perfect

If you didn't wake up at 3 a.m. to binge-watch Fuller House, one there must be something wrong with you. Two, you may want to stop reading this article now, because there are major spoiler alerts ahead. Throughout the 13 episode series, viewers ask one quesiton as they move from episode to episode: who does D.J. end up with on Fuller House? Well, having watch then entire series in record time, I can tell you that her choice is not only perfect, bust it's feminist AF.

From the first episode, we learn that D.J. Tanner (sorry, D.J. Tanner-Fuller) is a widowed mother of three, whose husband died on the line of duty as a firefighter. In that same episode, fans see D.J. reunite with her high school boyfriend Steve Hale. Obviously, fans of the '90s couple hope and pray the two get back together. Heck, even Steven wants to see a romantic reunion, letting D.J. know he'll be there for her when she's ready to start dating again. Even if that means waiting foreverrrr (Yes, that's a Jesse and the Rippers reference.) It seems like the perfect set-up right?

Well it would be if there wasn't another man. D.J.'s new love interest, Matt "Little Matty" Harmon, is introduced to the show in episode four. Though the two begin as co-workers, their partnership evolves into something more. (And it's very obvious, in my humble opinion.) And although it's great for D.J. to have dating options, it also spells disaster for fans of the Deej & Steve Showmance.

D.J. tries to balance the two for a few episodes, but in the season finale she is forced to decided between the two. In an ode to The Bachelorette, D.J. stands before her two love interests, rose in hand, and says that she chooses. . . neither.

Now before you freak out, there's not another guy in the picture (though that would be pretty scandalous for an family series.) Rather, D.J. tells the men that she's choosing herself, explaining that she just started dating again and things got really complicated, really quickly. She ends her speech by noting that, "if it’s this hard for me to decide I must not be ready for a serious relationship."

Can I get a YAS for D.J. Tanner-Fuller?! Sure her speech falls a little flat, but at the end fo the day, D.J. recognizes that she doesn't need a man to make her happy. That it's OK to be single, even when society (and your sister and BFF) tells you that you have to be with someone. Bravo D.J.!!!

That being said, I'm still pushing for her to end up with Steve in Season 2. I can't help it. They're just too freakin' cute!