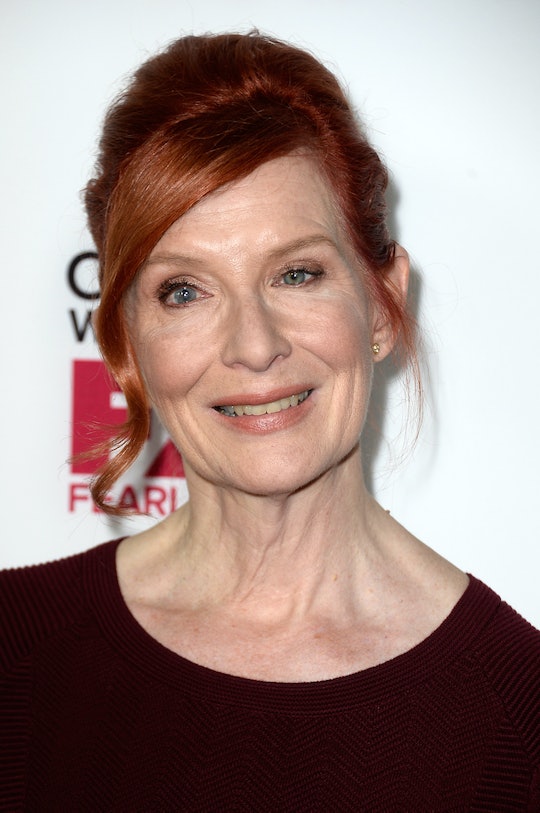 Frances Conroy Could Be Another Influential Leader On 'AHS: Cult'

Frances Conroy is arguably one of the most anticipated actresses that fans look forward to with each season on American Horror Story. This season, she was absent for the first half, but it looks like she's about to make a strong return to the series. So who does Frances Conroy play on AHS: Cult? She could be another influential leader, especially now that Kai is incapacitated.

In the preview for Episode 7, you can see her interaction with Beverly, who has shown plenty of signs herself that she wants to have more of a front seat place in Kai's cult. So far, he's still the one calling the shots, but after his planned assassination attempt, Beverly might try to use the opportunity to rise up and take over. Or, at the very least, start a group of her own.

In the promo, Beverly meets with Conroy's character, who tells her that she knows what it's like to assassinate a man. And since the episode is slated to contain a recreation of Andy Warhol's assassination attempt in 1968 by Valerie Solanas, it's entirely possible that Conroy's character is closely related to the crime, if not a present day figure who was a big part of it.

On Reddit, LanaDelHorror theorized that Conroy actually plays the present-day version of Solanas, who is believed to have died in 1988. But since this is AHS, Warhol's would-be assassin could have faked her own death and is now leading a present-day all female cult that tries to lure Beverly into the fold. Lena Dunham will be playing Solanas in flashback scenes, so Conroy could be playing the older version of her on AHS: Cult.

It's also possible, however, that Conroy is the show's portrayal of Margo Feiden, the producer and art dealer who Solanas reportedly went to the day she shot Warhol. According to Feiden, Solanas tried to show her the play she'd written, which Warhol had turned down, and told her that once she killed Warhol, the play would be famous. Feiden refused to produce the play and when Solanas left her apartment, Feiden reportedly called a number of police precincts to tell them of Solanas' plan.

From the sound of it, there's no reason to suggest that Feiden would ever turn out to be the apparent cult leader that Conroy's character on AHS: Cult seems to be, but appearance-wise, the connection could be legit.

In another quick scene in the promo for AHS: Cult Episode 7, you see Dunham's character in bed with a woman who has the same choppy black hair of Conroy's present day character. When Conroy says that she knows what it's like to assassinate a man in the clip, she could be referring to a fictional part in Solanas' attempt at taking Warhol's life. And it wouldn't be totally out of the question for AHS to put a fictional spin on something historic, as they've done in the past with the different AHS: Hotel serial killers.

Another Redditor, pumapanties, posted the possibility that Conroy plays Squeaky Fromme, known most for her part in the Manson Family murders of 1969 and also her assassination attempt on former President Gerald Ford. The line in the promo about assassinating a man would make sense then and since Fromme is still alive today, that would also line up with the theory. Not to mention that since Evan Peters is also set to play Charles Manson later in the season, having a present day Fromme would usher that in more organically.

Clearly, there are a few different people Conroy could be playing on AHS: Cult, but the important thing is that she's very likely a leader of her own cult and might play a hand in taking down Kai. That, or he'll be three steps ahead of her and convince Beverly to take out the competition. Either way, Conroy's character on AHS: Cult is sure to shake things up even more.