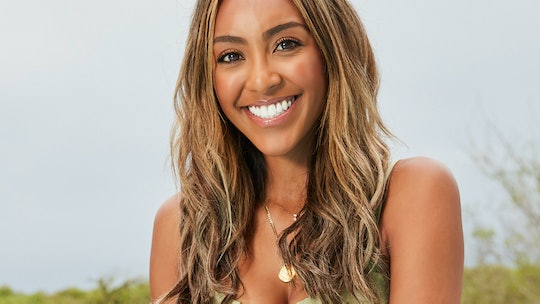 Who Does Tayshia End Up With On ‘Bachelor In Paradise'? Because I'm Seriously Baffled

Be still my heart. Tayshia Adams and John Paul Jones swept fans off their feet during Week 3 of Bachelor in Paradise Season 6, and honestly, I'm still trying to recover. The couple's surprising start began with a Shakespearean poem and has now reached a point where fans call the Bachelor alum "Tayshia Paul Jones." And while most members of Bachelor Nation are rooting for the unexpected duo to end up together, others can't help but wonder who Tayshia ends up with on Bachelor in Paradise. There's a lot of drama coming up in the next few weeks, but fans are already hoping for a happily ever after.

As of this point, it's simply too early to tell if Tayshia ends up with someone at the end of BiP, much less if it is JPJ. However, Tayshia might have spilled the tea on her current relationship status during Ali Fedotowsky and Rachel Lindsay's Bachelor Happy Hour with Rachel & Ali podcast. After giving her take on all the Blake Horstmann drama, Tayshia delved into her blossoming romance with JPJ, where she gushed about her fellow Paradise cast member.

"John Paul Jones is actually very intellectual. He's a financial analyst," Tayshia revealed. "The conversations you have with John Paul Jones are very stimulating, if you will. He's really smart."

Rachel and Ali then asked the Season 6 contestant to tease her future with JPJ. "I don't know," Tayshia said coyly. "You just have to watch and see how it plays out." But then the reality star shared a bit of news that might spoil her arc for the rest of BiP.

When probed about her projects following the ABC reality series, Tayshia said, "I have a couple of things I’m working on that I’m excited to show off later down the road. I still work as a bookkeeper. I still do my thing. I'm just trying to live my life. I'm enjoying myself being single."

Hold up, what do you mean by "single"? Rachel and Ali didn't exactly dig into the statement, but if it means Tayshia makes it out of Paradise alone, then I guess love is dead.

That being said, fans have a sneaking suspicion Tayshia and JPJ were hanging out after BiP, as reported by Betches. On Aug. 14, Tayshia posted a photo on a fishing boat, and it was a dead ringer for the one owned by JPJ. The allegations were quickly denied, but the photo in question has since been deleted, which only added fuel to the fire.

So what's the truth? Tayshia clearly states she is currently single, meaning she either leaves Mexico without a partner or she ends up with someone and they break it off after the show. The boat pic also adds another element to the mix. And although JPJ and Tayshia could just be friends after BiP, only time will tell, and fans will just have to wait and see what happens next.