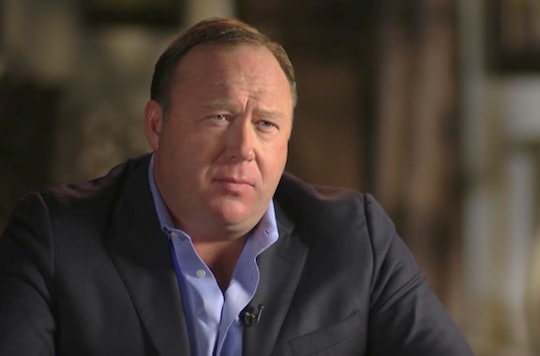 On Monday, Megyn Kelly received backlash for an upcoming interview she will do on her new show Sunday Night with Megyn Kelly. The episode, set to air on June 18, will give a national platform to a longtime Sandy Hook denier and conspiracy theorist. Unfortunately for the families of Sandy Hook, their pain will be exploited once again as Kelly conducts an interview with a man who claims their children's deaths didn't happen. So, who is Alex Jones? A representative for Jones did not immediately respond to Romper's request for comment.

On Sunday, six days before the June 18 interview, Kelly previewed a clip of the episode for her fans. In the clip, Kelly asks Jones the Sandy Hook Elementary School shooting on Dec. 14, 2015 and his conspiracy theories. Although Jones appears to dodge Kelly's line of questioning on the issue, he ultimately refuses to backtrack on his false and incredibly hurtful stance that the Sandy Hook shooting wasn't real. When Kelly presses Jones on what he has said about Newtown, he claims to have looked at "all the angles" of the tragedy before having made his statements. The clip then ends with Jones' diverting the conversation to all the "evil wars" the media supposedly refuses to cover.

Although Jones' comments in the preview are infuriating enough, what's especially frustrating for many people is that veteran reporters like Kelly and the network for which she works should know better than to give him airtime, especially since this isn't the first time Jones has denied the tragedy. (NBC did not immediately respond to Romper's request for comment.) According to the Daily Beast, Jones has bandied about Sandy Hook hoax headlines like “Mystery: Sandy Hook Victim Dies (Again) In Pakistan” and “College Professor Says ‘Crisis Actors’ May Have Played Part If Sandy Hook Was Indeed a Hoax.” In November 2016, Jones took to his right-wing show Infowars to give his "final statement" on Sandy Hook after years of referring to the tragedy as a hoax. In the segment, Jones said it "hurts" his heart that people lose children but that Sandy Hook "has more holes in it than Swiss cheese," according to Media Matters. Jones also said:

This is a tragedy. I wish it never would have happened. But quite frankly, I wish that the official story was true because that’s a lot less scary than them staging something like this. But when you think about how they staged [weapons of mass destruction] to kill over a million Iraqis, when you think about all the other hoaxes, all the other lies, all the other rigging, and the way they’re freaking out about it and trying to cover up every level of it, it just makes me ask what really happened there?

Obviously, Jones' steadfast Sandy Hook denials have tortured the parents of the shooting's 20 young victims. Lenny Pozner, the father of 6-year-old victim Noah Pozner, expressed his outrage over Jones' claims in April 2017. Pozner was furious that Jones' lawyer claimed his client was a "performance artist" during a custody trial over Jones' three children, according to the Daily Beast. Pozner said:

I wish I could be there in the courtroom to stare him down to remind him of how he’s throwing salt on a wound, and so he can remember how he handed out salt for other people to throw on mine.

Despite all of the anguish surrounding the episode, Kelly is doubling down on her decision to speak with Jones. In a series of tweets on Sunday, Kelly defended her choice by citing Jones' relationship with President Donald Trump and the fact that Infowars has White House press credentials. Kelly also referred to the interview, which is currently dredging up unimaginable heartache for Sandy Hook families, as "riveting."

Although Kelly cites Trump's support of Jones as a reason to accept the interview, it doesn't at all justify why she thought promoting Jones was OK. It's especially confusing when you consider a woman named Lucy Richardson was just sentenced to five months in prison for threatening and harassing Pozner. Similarly to Jones, Richardson believes that the shooting is a conspiracy and is entirely made up. In Richardson's case, she thinks the shooting is a conspiracy designed by Democrats to gain stricter gun safety laws in the United States. It's disturbing to consider that someone like Richardson could be emboldened by a voice like Jones, especially when we've seen how conspiracy theories touted about online can manifest into terrifying actions carried out in the real world. Americans just witnessed the result of the #PizzaGate conspiracy, in which a man brought a gun into a Washington, D.C. area pizza parlor over unsubstantiated and false rumors that Hillary Clinton was running an elite pedophile ring out of the establishment's basement.

In addition to promoting violence, Jones' interview chisels away at the visibility of victims' families. By Jones denying Sandy Hook ever happened, he's also denying the trauma and grief of the families affected by the tragedy. Taking it a step further, Jones is setting a disturbing precedent for how we treat victims who've survived acts of violence, like the survivors of the Townville Elementary School shooting on Sept. 28, 2016. The shooting, which took place in the school's playground and left one child dead, subsequently traumatized many students. One of the shooting's survivors, a 7-year-old girl named Ava Olsen, said to her mother “Please don’t make me go out there again,” on the day students were to return to school, according to The Washington Post.

No matter which way you slice it, airing Jones' interview on a national news network, calling it "riveting," and allowing him to have an audience to whom he can present his views is ethically questionable, if not horrible. Not only does it deny the trauma of Sandy Hook families, but it also puts forth the notion that it's OK to deny and question the trauma of survivors everywhere.