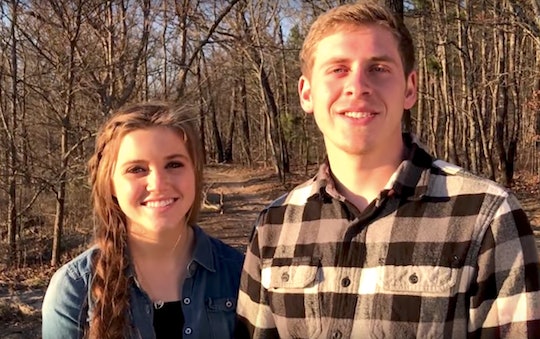 After a relatively quick courtship, Counting On's Joy-Anna Duggar married her family friend, 23-year-old Austin Forsyth. What's more, the newlyweds now have a baby on the way, starting their family almost immediately after their May nuptials. So who is Austin Forsyth? Joy-Anna Duggar's husband holds a similar belief system as she does, and the couple's recent TLC wedding special let viewers in on what makes their relationship so special (including that whole first-kiss-on-your-wedding-day thing).

The Forsyths even have a joint Instagram account where you can keep up with their day-to-day happenings, replete with the first of many pregnancy bump mirror pics. Fans have watched 19-year-old Joy-Anna grow up since the Duggar family's show first aired back in 2008. Nearly 10 years later, the spin-off is more focused on the next generation of procreators. Austin and Joy-Anna are clearly crazy about one another, and that's in part because they have so much in common.

Here are five things you may not have known about Joy-Anna's other half:

1. Austin's Family Was On A Reality Show, Too

Yep, you read that right — for the first season of World's Strictest Parents, Austin's mom and dad hosted two "troubled" teens and insisted that their guests act is accordance with a common behavioral code. Expectations included getting through chores at the family's camp, respecting an open bedroom door policy, and vowing to save sex until marriage and first kisses until respective wedding days.

So if you're wondering whether or not Austin had a lot to adjust to in dating a Duggar daughter, chances are it was even more lax of an environment than he was used to growing up.

2. He Has Conservative Political Beliefs

The Forsyths have no issue expressing their right-leaning perspectives. "Great turnout today at the Arkansas State Capital for the Arkansas Young Republican State Convention," the couple exclaimed on their eponymous Instagram account back in August, along with a photo of them all dressed up. They also shared a post encouraging their followers to "pray for our leaders," showing that, for them, religion and politics are fully intertwined.

3. He Says He's Ready For Fatherhood

Joy-Anna's expecting their first child, and Austin's said that he's open to all of the changes ahead. “I’m really looking forward to the journey of this pregnancy and all the different stages it will bring," Austin told People at the time of the announcement in August. "It’s really exciting and I feel so blessed to be a dad! We are beyond thankful!”

4. Austin's An Outdoorsman For Sure

The Forsyths love hiking, as shown by their selfies on top of various mountain peaks, dressed up all granola-chic. Seeing as he grew up working at a camp and is used to plenty of open space, it's good to know that he's able to share that passion with his wife. In fact, their joint bachelor and bachelorette weekend consisted of a camping trip — bonfire included, as OK! Magazine reported.

5. He Comes From A Small[er] Family

Whereas Joy-Anna's used to 18 brothers and sisters running around, Austin comes from a more typical family of four. His parents, Terry and Roxanne Forsyth, value their closeness, promoting 1800s-inspired family dynamics at their Christian family camp in Arkansas, according to the camp's website.

As People reported, Austin and Joy-Anna Forsyth grew up together, have a shared faith, and, given their upbringings, likely believe that children should be raised the same way. Austin's comfort on-camera is made easier by his experience growing up with the World's Strictest Parents, so the reality TV life likely hasn't been that crazy of an adjustment for him.

Joy-Anna's anticipated due date is in March — about nine months after her wedding, The date's certainly creeping up, but luckily the young couple has family around to support them, providing all the pre- and postnatal advice they could ever need. Plus, all that family means built-in babysitters whenever, doesn't it?