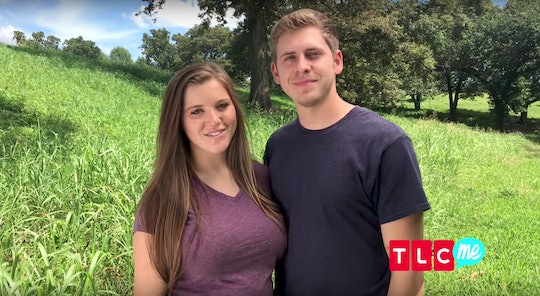 Fans of the TLC megahit 19 Kids and Counting have not exactly been deprived of the Duggars since the show ended in 2015. Far from it — a group of the older Duggar siblings have kept the family's penchant for mixing reality TV and procreation going strong with a spinoff, aptly titled Counting On. And after some of her siblings documented the expansion of their families on the show, it's one soon-to-be first-time mom's time to add to the legacy. Joy-Anna Duggar's late August announcement that she and husband Austin Forsyth are expecting has shifted the attention to the newlyweds. Fans want to know everything from what Joy-Anna Duggar does to when she's due — and, honestly, the answers to both are probably not what you'd expect.

In a sense, the name Duggar is almost as synonymous with reality television as Kardashian — another clan that's reportedly experiencing somewhat of a baby boom — even though the two families' values appear dramatically different. While the Kardashian/Jenners tout their sex appeal as the primary driver of their popularity, the Duggars embody conservative Christian values some would even call oppressive.

So, it comes as little surprise that the family has pretty steadfastly supported ultraconservative political candidates. Which is why it makes sense that 19-year-old Duggar has worked in politics herself, in addition to raking in some cash from her role on Counting On.

Way back in February — before Duggar's May 26 wedding to Forsyth and their big announcement that they are expecting a baby a few months later — the family shared on its blog that she had a political internship. Citing Rep. Charlene Fite, the author of the blog post explained that both Joy-Anna and her brother Jedidiah, 18, were interning together at the Arkansas House of Representatives in Little Rock.

Seems like a pretty plum position for two members of the same family to land at the same time, but the Duggars have connections. The family has "deep roots in politics," according to the blog post, with patriarch Jim Bob Duggar having served two terms in the Arkansas House of Representatives himself, starting in the late 1990s.

The post didn't mention how long the internship would last, or whether Joy-Anna has any plans to pursue a career in politics. But her foray into the realm of politics is in line with that of her older brother Josh Duggar, who has campaigned for GOP Senate candidates in Kansas, Virginia, and Mississippi, according to CNN. He's also been photographed with Sens. Rand Paul and Ted Cruz, former Florida Gov. Jeb Bush, former Pennsylvania Sen. Rick Santorum and former Arkansas Gov. Mike Huckabee, the news station reported.

And Duggar herself has publicized her right-leaning views, too, when she shared anti-abortion messages alongside a photo of her bump recently. It seems like a strange choice, considering the context of celebrating her own pregnancy — unless you consider the rumors that Duggar actually knew she was pregnant before her wedding in May.

If that were the case, of course, she and Forsyth would certainly incur the wrath (or at least the harsh disapproval) of their conservative families. But the family has insisted that Duggar is due in early March, the International Business Times reported, a date follows her wedding by more or less exactly nine months.

Whatever the circumstances of the baby's conception, it's clear that his or her parents are thrilled to be starting their family, as Duggar wrote in her Instagram pregnancy announcement:

Whether she ultimately focuses on her career, having a big family like the one she came from, or both, it seems as though Joy-Anna Duggar will certainly feel right at home.