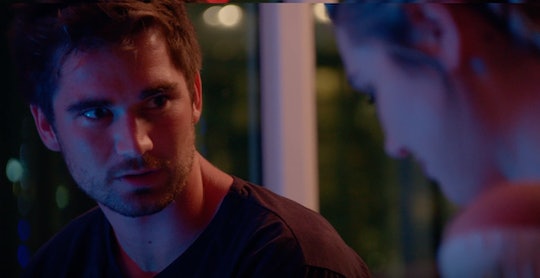 Ben & Madisson On 'Siesta Key' Still Have Some Unfinished Business

Although Ben only made a quick appearance on Siesta Key at the end of Season 1, it was clear that he had some unfinished business with Madisson. The college friends who double as an on again/off again couple are still doing the wishy washy thing, but it doesn't look like he’s going anywhere anytime soon. So, who is Ben on Siesta Key? The newcomer’s ties to the show land with Madisson, but he doesn't seem ready to commit to anything serious.

That being said, I still see him staying around for a little while, if only to add to Madisson’s storyline this season. Ben went to college with her at Southern Methodist University in Dallas and now, he apparently followed her to Florida.

When he isn’t confusing Madisson and Siesta Key fans with his feelings for her, Ben is hanging out with the rest of the cast or going to football games. According to his Instagram stories, Ben makes custom clothing, shoes, and basketball hoops. He has several different hoodies he altered to have specially designed MTV logos on them and specially designed backboards for hoops.

It's unclear how he finds his clientele or if this is is just something he does on the side for fun, but it does seem like something he should be monetizing if he isn't already. And it’s a nice change from the usual Instagram modeling you tend to see from rising reality stars.

Ben is also a big dog person, which might earn him a few brownie points with fans who are still annoyed that he hasn't yet committed to Madisson on Siesta Key. His Instagram stories are full of his adventures either playing with his family’s dogs or dogsitting.

It looks like he might also be dating Madisson now that filming for Season 2 is done. It's either that, or they have stayed extremely close since filming wrapped. There are a handful of pictures of Madisson and Ben together with captions like "Got in trouble for bringing a snack to the bar" and "My little bit of sunshine on cloudy days." If you can forgive him for referring to Madisson as a "snack," it's actually pretty cute. And it gives me hope that these two can work it out to give Madisson a better finale than she got at the end of the first season.

Unlike the other stars of Siesta Key, Ben didn't grow up in the area and he doesn't share the same long history that most of them do. In a way, that could make him the best match for Madisson moving forward. Unlike Alex, he hasn't worked his way through half of the women in Siesta Key and he seems to have come to town for the sole purpose of being with Madisson. However long it might take to actually get them together this season remains to be seen.

Judging by Instagram, Ben has slipped right in with the rest of the Siesta Key cast, so if he and Madisson are endgame material, he could be here for the long haul. I’m not sure if he still lives and works in Dallas or if he plans to move to Siesta Key permanently, but he could probably work on his custom design business anywhere. And as a recent college grad, he might not be tied down anywhere just yet. As long as he’s willing to commit, his future with Madisson looks pretty bright.

So far this season, Ben has brought a fresh perspective as an outsider of sorts. Hopefully as the season goes on, he and Madisson can work out their issues.