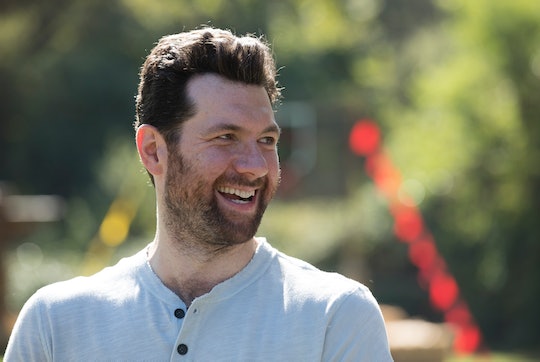 Billy Eichner Is The Comedic Relief 'The Bachelor' Needs

The Bachelor franchise is no stranger to bringing on A-list celebrities to help the Bachelor or Bachelorette along the way. In the past, the shows have featured big names like Ashton Kutcher, Mila Kunis, and Kevin Hart. This season, Colton and the women will get advice from Nick Offerman and Megan Mullally, but Billy Eichner is also going to make an appearance in full overly energetic form. If you're not sure, you may be wondering: Who is Billy Eichner on The Bachelor? It actually makes perfect sense that he’s on the same episode as the real life couple.

Eichner is an actor and comedian who previously starred in Parks and Recreation with both Offerman and Mullally. So if he looks (or sounds) familiar, that could be where you know him from. He also has his own game show, Billy on the Street, on TruTV, wherein he approaches surprised people on the street and asks them ridiculous trivia questions, sometimes in exchange for a little cash. It’s amazing and if you don't go watch it right now, you will be severely missing out. (Side note: Parks and Rec fans please read that in Craig’s voice and you will not be disappointed).

Most recently and probably most notably, however, Eichner has become one of the American Horror Story fan favorites. He first appeared in Season 7, AHS: Cult as both Harrison and Tex Watson. He then returned as Brock and Mutt in Season 8, AHS: Apocalypse.

While Eichner has done his share of genre hopping, it's clear that his first passion is comedy and over the years, he’s honed his own unique brand of humor that he’s become known for. Billy on the Street has evolved to include political commentary as well as lighter entertainment news — but it’s his take on pop culture that really makes it hard to turn off. In a 2017 NPR interview, Eichner said that he was interested in show business and pop culture as a child and eventually that snowballed into his TruTV series and other opportunities along the way.

"I think the whole show is about my own personal love-hate relationship with my interest in the entertainment industry," he admitted. "As I've gotten older, I realize it's ridiculous. Award shows are fun, but completely arbitrary and absurd. And yet, I will watch every single one of them. And this is, you know — Billy on the Street is inspired by that love-hate relationship."

Because of the steady success of Billy on the Street, Eichner was nominated for a Primetime Emmy Award for the show in both 2015 and 2017. In addition to becoming another Ryan Murphy favorite, Eichner is going to lend his voice to the upcoming Lion King remake as Timon and he’s a regular on Netflix’s Friends From College. In other words, you aren't getting rid of him anytime soon.

When he shows up on The Bachelor Monday night, Eichner is going to be hosting a Bachelor dating camp for a few of the contestants. I’m not sure what that will entail, other than getting to see the competitive side of some of the clear frontrunners, but hopefully Eichner will be ready to put them in their places as needed. If nothing else, he’ll add some much needed comedic commentary as the women get extra antsy for some coveted date roses.