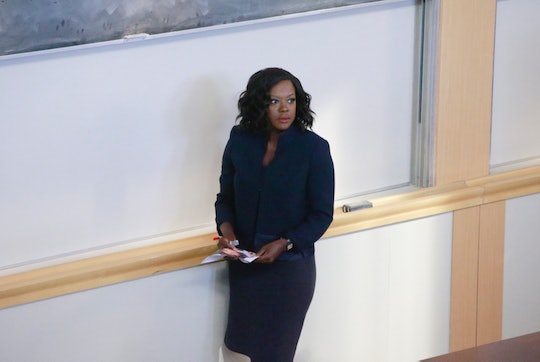 Who Is Blackmailing Annalise On 'How To Get Away With Murder'? They Know She's A Killer

When Season 2 of How to Get Away with Murder ended, Annalise and the Keating five were as dysfunctional as ever but instead of ending the season with a death they would cover up, we saw Wes's birth father, Wallace Mahoney, murdered in front of him on the street. But with the identity of that killer still unknown and photos of Annalise floating around with 'killer' written on them, who is blackmailing Annalise on How to Get Away with Murder? Of the people who know anything about Annalise's antics, there's Frank who is still very much M.I.A., as well as Nate who paid for Annalise's sins dearly when he spent a good portion of Season 2 in jail because of her actions.

But there's really no shortage of people who Annalise has crossed in some way. Lest we forget the murder of Mahoney out on the street, the culprit of which is still at large. Did Frank kill Mahoney on How to Get Away with Murder? And if that's the case, does someone out there know that Annalise was the reason for Frank doing it? Or is Frank fed up with being Annalise's lapdog at this point and wants to tell her what's what by blackmailing her with those photos plastered all over campus?

Unfortunately, the photos of Annalise around the campus aren't wrong in those blood red letters calling her a killer. She might insist that she and her students are "good people now," but that doesn't erase all of the crimes they'd committed as a group and all of the murders that Annalise has covered up. It would make sense, though, for the person blackmailing Annalise on How to Get Away with Murder to somehow be connected to Mahoney and his death from the Season 2 finale, and according to Entertainment Weekly, Executive Producer Pete Nowalk said that we will find out who killed Mahoney regardless.

So far from what we've seen, most of the loose ends have been tied up for Annalise. Caleb is dead after it was revealed that he'd murdered his parents last season and pinned the whole thing on his sister, Rebecca and that whole story has been done for a while now, and the only person who knows anything (that we know of) is Frank, who may have just evaded someone Annalise sent there to kill him.

Of course that's not to say that Annalise doesn't have tons of enemies out there that she's made over the years. That new dean showed up to the college just in time to shut her down and try to kick her out, so maybe she's someone from Annalise's past we aren't aware of yet. Either way, finding out who is blackmailing Annalise on How to Get Away with Murder is going to be one of the main mysteries of Season 3, right up there with that requisite mystery death.