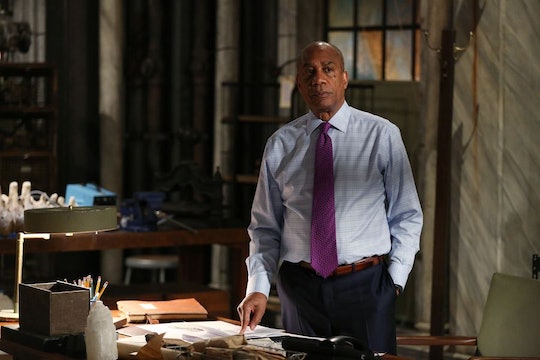 Someone Is Blackmailing Rowan On 'Scandal'

But where B613 has a collective name, there doesn't even seem to be a direct leader of this new organization who wanted so badly to get Mellie elected. The mystery started during Season 6, Episode 5 when the mysterious woman in the red dress showed up in Rowan's lab and seemed to be way above him in a way viewers haven't seen anyone ranked above Rowan before.

All we know for sure about these people is that they're just as powerful (if not more so) than B613 and they seem to be everywhere. Rowan tried to turn the tables and assert his Papa Pope power over them as he so often does by killing the woman he loved. But instead of bowing down to them, they made it clear that instead of using Sandra to keep him under their control, they'd have Olivia killed in an instant if he disobeyed them. So who are these people who blackmailed Rowan on Scandal and are continuing to manipulate him?

Joe Morton (Rowan) told TVLine that playing the villain character comes easily to him, but that now with the introduction of the mysterious woman in red and her men, there's no telling where it's going to go or what the endgame is for the organization.

"It’s always interesting when you see someone very powerful … having to go through the slings and arrows, the ups and downs of being powerful. It’s an interesting journey to follow," Morton said. "For someone like Rowan, I’ll be interested to see if in fact he’s beholden to someone else. Is it just this woman, or is there a much larger organization that might be out there in the world?"

Obviously now we know that it's not just her, but apparently a lot of different individuals who are all together for the same reason, which is to get Mellie in the White House by any means possible. Are they really all equal, as they claim to be? Or is there a higher power somewhere controlling everything, like Olivia's mom, whose been missing forever and whose dramatic return would clash so well with Rowan's presence?

Whoever this group is seems to be just getting started with Rowan though, and if they're the big bad of this season, there are bound to be a lot of twists and turns to come.