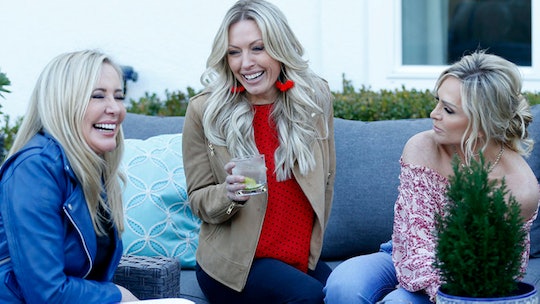 The Real Housewives of Orange County is back for Season 14, and it looks like newcomer Braunwyn Windham-Burke is settling in just fine. Fans fell in love with the new reality star when she made her Bravo debut in the Aug. 6 premiere, but it was her mother, Deborah Windham — aka Dr. Deb — who stole the show. So who is Braunwyn's mom on RHOC, really? Don't worry, everyone will get to see more from Dr. Deb in upcoming episodes.

When Dr. Deb first appeared on RHOC with her multicolored hair and lively personality, fans knew she was an instant star. Seriously, can Bravo just give viewers an hour of Dr. Deb and Lydia Mclaughlin's mom, Judy Stirling, hanging out? That'd be great, thanks. Nevertheless, Dr. Deb is more than just a TV personality, which is clear if you take a look at her Instagram profile under the handle @1drdeb. Dr. Deb's bio states she is a Family Practice M.D. from UCLA, pro-aging activist, and bad*ss woman. She also claims to be a "Medicine Woman" and "play-in-life coach." Then when Braunwyn explained Dr. Deb's many lives in an interview with Entertainment Tonight, she described her mother as a "priestess of Burning Man" and "retired rock star."

Luckily for fans, there are still plenty of opportunities to see Dr. Deb in RHOC Season 14. "My mom is fun," Braunwyn told ET. "She is big and bright and colorful and, yeah, she's a big part of the show."

Braunwyn also delved into her relationship with her mom. "I was with her through most of it," Braunwyn told the publication of Dr. Deb's adventures. "I was hanging out at the Whiskey [a Go Go] and the Roxy in footie pajamas. When she was in med school, I was living with my grandparents. During the Burning Man phase, I was procreating."

And boy, did she. Braunwyn and her husband, Sean Burke, share seven children, who Dr. Deb frequently looks after. That said, Braunwyn — aka the woman who breastfed for 18 years — revealed she joined RHOC to show she can be a mom and have fun. She told People:

Before I got cast on Real Housewives, I was sitting in my bed and I was crying. I looked at my husband and said, 'I have to have something else. I have been a stay-at-home mom for almost nineteen years and I need something that's just for me.' This has been the most amazing opportunity. I have gone outside my comfort zone. I have learned a lot about myself. I feel like becoming a Housewife has become one of the best decisions I've ever made because it made Braunwyn a fully formed person instead of just a mom.

Looks like Braunwyn and Dr. Deb are more alike than fans might think. Both women seem to be living their best lives, all while embracing motherhood. And honestly, if that isn't something worth rooting for, I don't know what is.