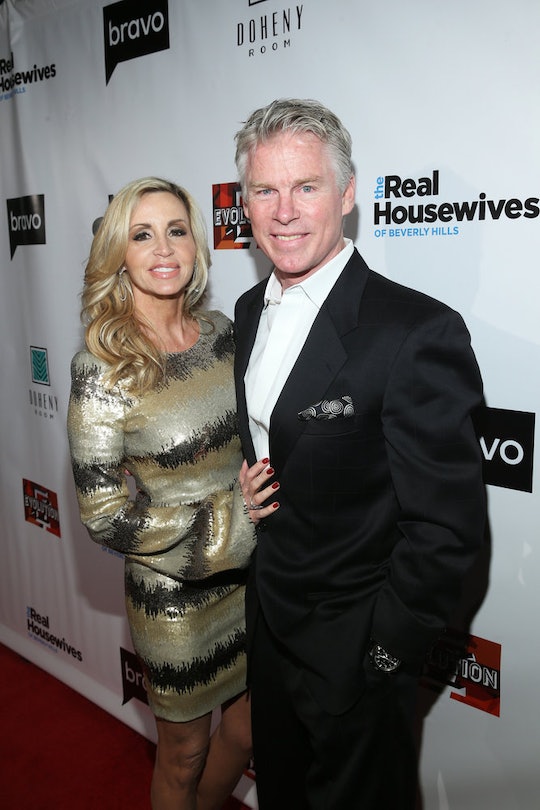 Everything You Need To Know About Camille Grammer's Boyfriend

These days, you really don't have to actively be a housewife in order to be part of the Real Housewives franchise. Camille Grammer, the ex-wife of actor Kelsey Grammer, is proof of that. In fact, the RHOBH star has been unmarried since her divorce in 2011, but all that could change soon since things are serious with her boyfriend. So who is Camille Grammer’s boyfriend, exactly? David C. Meyer isn’t really part of the Hollywood life that Grammer is used to, but he’s definitely done well for himself.

Meyer is an attorney with the Arent Fox firm in Los Angeles and, according to the firm’s website, he’s in charge of the Corporate and Real Estate Transactional Practice. This means that he works with businesses and individuals who are interested in purchasing, selling, or even developing real estate. Not only that, but Meyer also assists companies in corporate issues regarding their assets and clients. Basically, he’s a big deal at the firm and at the time of his hire in 2012, his collegue, Aaron Jacoby said in a press release that Meyer "provides clients with very sophisticated business counsel" and that "David is the answer to our clients' growing corporate acquisition needs and will help our auto industry clients understand and outpace the constant change that now defines the industry."

Before he even began his career as a lawyer, Meyer attended both the University of California at Berkeley and USC Gould School of Law for his education, so his career has always been based in California for the most part. It wasn’t until 2016 that Meyer met Grammer in Malibu, where he lives, and the two hit it off.

And it seems that they're ready to take the next step in their relationship. Back in October 2017, a rep for Grammer confirmed to Page Six that Grammer and Meyer are officially engaged. In December 2017, Grammer spoke with Entertainment Tonight about her relationship with Meyer and what made her realize that he was the one for her. "I got butterflies again," she said. "He made me smile, he’s smart, we’re contemporaries, we understand each other. I’m very impressed with who he is as a person. I admire him and I think the feeling is mutual." Despite her first marriage ending in 2011, Grammer says that she "believes in love" and "having a lifetime partner."

Although Meyer has a successful career in law, he’s also an accomplished athlete. He’s previously competed in the Ironman World Championships in Hawaii and the Ironman 70.3 World Championships triathlon as well. As you can see on Grammer’s Instagram, he’s still active in all kinds of outdoor sports, even when he’s not competing in something as time consuming and intense as Ironman.

While Grammer has two teenage children from her first marriage, Meyer also has two sons from his previous marriage, so their family will only continue to grow. Since Meyer is an attorney and not part of show business in any capacity, being part of Grammer’s world has no doubt been something of a culture shock, but since he put a ring on her finger, he seems committed for the long haul.

Being thrust into the public eye a little more will no doubt be a challenge, but being part of Grammer’s life permanently means being more of a fixture on Real Housewives of Beverly Hills. And while that can take its toll on anyone, it seems like the newly engaged couple is enjoying their fresh start together.