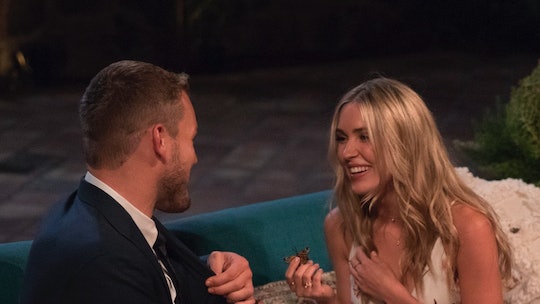 Cassie's Sister On 'The Bachelor' Is Her Biggest Supporter & It's Adorable

Cassie was easily the surprise frontrunner of Colton’s season of The Bachelor. Their relationship didn't start off with any camera-ready drama, but somewhere along the way, she became part of his final three and her hometown date was memorable enough to make up for the lack of drama she brought to the season. Cassie’s dad was everyone’s dad when he met Colton and was immediately suspicious of him, but fans are also curious about who Cassie’s sister is on The Bachelor. Michelle Randolph has actually been around cameras before, so it was no surprise that she was a natural when she reunited with her sister BFF on camera during hometowns and when she met Colton with a room full of them.

Michelle is an actress who has been in the TV movies House of the Witch and A Snow White Christmas. She’s also going to be in the upcoming dramedy 5 Years Apart. While she may not have any big awards under her belt just yet, she did attend the 2019 Oscars with her boyfriend, fellow actor Gregg Sulkin. Sulkin has been in a few small movies of his own and was also featured in Disney Channel series As the Bell Rings and Wizards of Waverly Place. They are like the up and coming actor power couple and after seeing Michelle on The Bachelor last week, fans saw that she also has a strong head on her shoulders.

During hometowns, Cassie and Michelle had a little sit-down away from their parents and Colton. Michelle told Cassie that she’s perfect and that she deserves perfection in a partner. It was pretty adorable. "I don't want you to settle for anything less," Michelle told her sister through tears.

Can we all have sister BFFs that look out for us like that? Because that was probably exactly what Cassie needed to hear instead of Michelle gushing over Cassie’s potential future husband.

When Michelle isn't working on another movie or spending time with her boyfriend, she’s busy making memories with Cassie. They look and act like twins, but they’re two years apart in age and the next best thing to twin sisters. They definitely seem as close as two sisters could be.

Like Cassie, it looks like Michelle values family over everything else and under an Instagram photo of the two of them, Michelle wrote, "To the best person in my life, my other half, the avocado to my toast. I love you more than I can even describe! You make life fun. Happiest birthday to you. I’m so excited to spend life with you by my side!!!"

Michelle has also done some modeling, though it goes well beyond your standard Instagram modeling posts. She is signed with the Wilhelmina modeling agency and has modeled for Forever 21, Tobi, and Year of Ours. Although Michelle and Cassie might have different career aspirations, they’re both apparently going to school together. Cassie’s Bachelor bio says that she’s currently in school working toward her degree in speech pathology, and in a recent Instagram post, Michelle joked that they were procrastinating together rather than studying, as they should have been. At this point, I almost wish Michelle had been single at the time of Bachelor casting so that she and Cassie could have been on Colton’s season together.

Since Michelle is such a big part of Cassie’s life, this isn't necessarily the last fans have seen of her. If Cassie makes it to the final two and some of Cassie’s family comes to visit to give her moral support as Colton makes his final decision, there’s a good chance she would want Michelle there above almost anyone else. No matter how The Bachelor ends this season, though, Cassie will have her sister to lean on for support or to celebrate her new love.