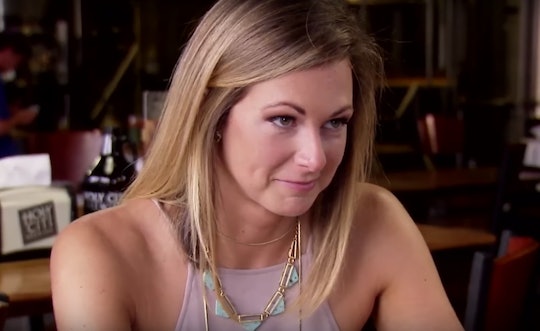 'Southern Charm's Chelsea Doesn't Need A Man To Be Happy

Before Chelsea Meissner was a fan favorite and a regular cast member on Southern Charm, she was Austen Kroll’s girlfriend. After they broke up, however, she wasn’t about to go anywhere, as she’s become something of a staple on the hit Bravo series. Austen’s girlfriend or not, she definitely has a place on the show full time! But since they’ve been broken up for some time, who is Chelsea dating now?

The Southern Charm star and Austen broke up at the end of season four when she told Austen that they needed to take a step back from their relationship. Apparently for Austen that meant finding someone else entirely, in his case in the form of Chelsea’s friend Victoria Bolyard, but Chelsea still hasn't had the need to go back to him. To her credit, though, she doesn’t seem to have had the need to be with anyone as of late. There might have been some innocent flirting with Austen here and there throughout Southern Charm season five, but for the most part, she’s either chosen to be single or has kept a romance way under the radar.

There’s no mystery man on Chelsea’s Instagram and there haven’t been any boyfriends on Southern Charm as of late, so it looks like Chelsea isn't dating anyone at the moment.

For the most part, it seems like Chelsea values her independence above all else. Even when she was in a relationship with Austen back in 2017, when she gave Bravo a tour of her house, there was very much a vibe of Chelsea enjoying her own personal space. She also seems content to share that space with her trusty dog, but that kind of goes without saying. Sure, you can be in a relationship and still have independence of your own, but Chelsea doesn’t seem like the type of person who necessarily needs to be in a relationship at all times or her world will come crashing down around her. She’s basically the best friend we all need around to look to for advice and tips in life.

Instead of shacking up with a new guy as of late, Chelsea seems to be spending a lot time with family, where a lot of her loyalty lies. Not only that, but she’s been traveling with her family a lot too, including a trip to Italy with her brother, so she might not even have time for romance right now. Again, that’s totally OK in my book, since she seems to be having a lot of fun focusing on her family and the friends in her life.

If there is any guy who might have a slim, very slim to almost none chance with Chelsea, it’s probably fellow Southern Charm star Shep Rose. In an episode during season five, he dished to Chelsea about Austen’s habits of going out and meeting women, making it a point to say that his own values have shifted a lot from all of that. Since it’s a general theory among fans that Shep might have a thing for Chelsea, maybe someday she’ll see him that way. But right now, she seems totally content to be doing her own thing, sans any kind of boyfriend.

When Chelsea and Austen broke up during season four, the idea was that Chelsea wanted to slow things down. Since Austen’s interpretation of that led him to date her friend and now, very possibly, date Madison LeCroy, Chelsea definitely hasn't fallen back into old habits with him, but never say never. For right now, though, Chelsea is traveling, enjoying her friends and family, and seems plenty happy to be doing so without any romantic relationships in her life at the moment.