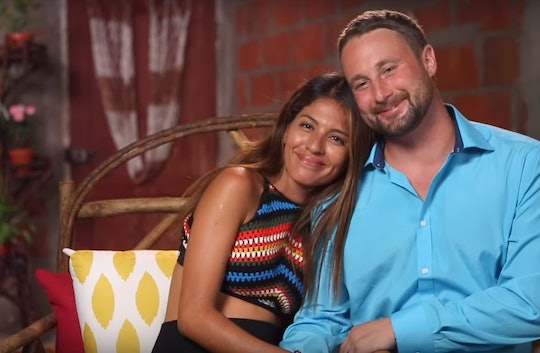 Corey & Evelin On '90 Day Fiance: The Other Way' Seem Like The Real Deal

90 Day Fiancé introduced the world the reality and drama behind international long distance couples and what happens when someone from another country moves to the US to start a life with their significant other. 90 Day Fiancé: The Other Way has the same premise, only reversed. Corey is one of the cast members set to move to a new country this season in the name of love, but who is Corey on 90 Day Fiancé: The Other Way? He already seems totally invested in making his relationship work. Not only has he literally invested money into his relationship with Evelin, who is from Ecuador, by sending her tens of thousands of dollars, but judging by the promos for the show’s inaugural season, he seems to be genuinely in love.

Because the show is so new and the cast isn't yet used to having their lives out in the open, it’s hard to say what Corey’s life was like before he met Evelin. It’s safe to say, however, that none of that really matters since he is willing to pick up his entire life and move more than 4,000 miles from Washington state to Ecuador to start a new life with his potential future bride.

Corey was a thrill-seeker before he made the biggest leap of uprooting his life to live in a foreign country. Before he met Evelin, he was already actively traveling and had a YouTube channel set up to film his cliff diving, bungee jumping, and other extreme recreational activities. So when he met Evelin on one of his many backpacking trips, it was like another day at the office for him. Only this time, he fell in love. Now, according to his Instagram, Corey owns and runs the restaurant Cocteles del Paraiso with Evelin. So it is more than likely that this particular 90 Day Fiancé: The Other Way couple worked out.

There is usually a pattern with a lot of 90 Day Fiancé couples. One of them moves to the US and struggles to settle in and then the couple has problems of their own as they work through language barriers, culture shocks, and standard relationship problems that come with moving in with someone without being together long enough first. With Corey and Evelin, however, things seem to be a little more legitimate than made-for-reality-TV. I’m sure they will have some struggles of their own and in one promo, Corey’s mom seems absolutely heartbroken that he is moving away from home permanently. But Corey and Evelin seem to have found genuine love with each other even before the cameras started rolling.

In fact, Corey and Evelin’s relationship doesn't have the typical pressure of wading through 90 days to get to know each other better and figure out if they want to get married after failing to build a solid foundation first. Corey will have 90 days after moving to Ecuador to propose to Evelin and marry her, but they were already together for four years before 90 Day Fiancé: The Other Way was even a thing.

Corey met Evelin on the beach when he took a trip to South America a few years ago and after sharing a love for the outdoors, the beach, and surfing, the couple hit it off almost immediately. It made sense, then, for them to continue their relationship once Corey had to return to the US. Since Evelin isn’t down for moving out of her own country, however, Corey is willing to take the leap and move for her. It says a lot about not only who Corey is, but how much love he apparently has for her.

I’m sure things won't be perfect for Corey and Evelin as they adjust to living together permanently, but they already seem like they are in this for the long haul.