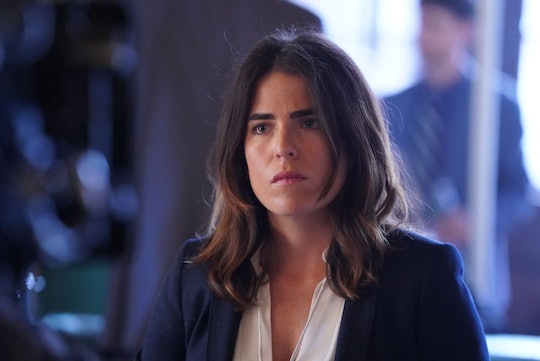 Dominic Can't Be Trusted On 'How To Get Away With Murder'

Now that the tears have (mostly) dried over losing Wes on How to Get Away with Murder, it’s time for everyone to finally find out the truth behind his murder. As viewers found out in the Season 3 finale, it was Laurel’s family friend Dominic who killed Wes under the orders of her father, but the exact motive is still unclear. And since he’s pretty new, who is Dominic on How to Get Away with Murder?

Laurel’s father, Jorge, obviously had a reason for having Wes killed and I refuse to believe it was just because he found out his daughter was sleeping with him. But of what fans know about Dominic, there is still very little to go on. As Laurel said, Dominic is a "family friend", but that’s probably code for "my dad’s hitman/bodyguard/errand boy/whatever else is called for." And, according to HTGAWM creator Pete Nowalk, fans could potentially learn more about Dominic during Season 4.

"I really like [Nicholas Gonzalez, the actor]. Obviously, we owe the audience a lot of answers. Usually, we do that pretty early on in the season," Nowalk told Entertainment Weekly. "So, why Dominic did this for Jorge and what his role is in the family, we’ll figure out. I expect, as long as he’s available to us, that we’ll get to see more of him."

He also added that there could be a potential romantic backstory for Laurel and Dominic on HTGAWM, which I honestly wouldn’t be surprised about. They wouldn’t have cast someone so good looking and close to her age if that wasn’t the case, right? It’s like Murphy’s Law of good looking TV characters. "Yes, I think all possibilities are there," Nowalk said of Laurel and Dominic having a romantic past on the show.

But since he was the hired hand who killed her boyfriend (though she doesn't know that for sure yet), I doubt anything will be rekindled between them anytime soon. The good news, though, is that he seemed to have enough foresight to literally bump into her on the street right before she could shoot Charles Mahoney, whom she’d originally thought was responsible for Wes’ murder. Now, it seems, Season 4 of HTGAWM will focus a lot on Laurel’s family dynamic and how Dominic and the crime fit in with everything.

"When Dominic showed up, everything changed," Nowalk told Entertainment Weekly. "Maybe now she’s not so sure that the Mahoneys had anything to do with it. I do want to be clear: I don’t know whether Laurel was going to kill him or not."

In the past on HTGAWM, Laurel’s relationship with her father has been shown as strained and viewers have been given tiny snippets of a complicated past. But what is pretty common knowledge is that her father has some illegal and shady dealings in addition to being a businessman and now, as we all know, he’s not averse to murder. Since Dominic is his henchman, fans can assume that he’s also not going to be a white hat moving forward.

And since Karla Souza (Laurel) obviously knows more about Laurel’s relationship with Dominic on HTGAWM than anyone, she was able to tease some of Season 4 to Entertainment Weekly. "I think [Laurel has] probably had enough times in her life where the apparition of Dominic means bad news," Souza revealed. She also added that viewers will get to see a lot more of Laurel’s relationship with her dad. "Jorge is coming back really strong this season. You see him from Episode 1, and you’re going to find out a lot more of our family business, of our history there. Laurel, however, keeps her enemies closer, so she’s not going to make it obvious that she’s going after him until there’s no question that that’s what she’s doing."

I don’t think that HTGAWM Season 4 is going to shift to be The Laurel Show, but since Dominic killed Wes and Jorge was the one pulling the strings and Jorge is most closely linked to Laurel, she’s no doubt going to be at the center of it all. And that only means that fans will get to find out more about who Dominic is on HTGAWM this season.

Right now, we know that he’s as shady as Laurel’s dad, obviously not afraid to kill, and that he’s been in Laurel’s life for a long time. Basically, he is to Jorge what Frank used to be for Annalise and that can’t be good moving forward.